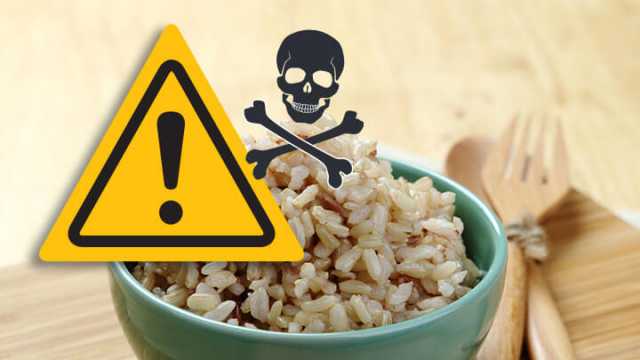 Living a gluten-free lifestyle is highly popular these days. Gluten-free menus are popping up at many restaurants. Grocery stores are dedicating entire aisles (or at least sections) to gluten-free wares. We have access to gluten-free cookbooks, new technologies that scan food for gluten and more.

A lot of people who don’t have celiac disease say that they feel much better when they eliminate gluten from their diets. It is estimated that a significant part of the population is sensitive to this protein. If you feel better without gluten in your life, then let it go! It’s important to eat in a way that makes your body feel its best.

However, there is one catch. A new study suggests that you may want to be careful about how much rice you’re eating, for some pretty scary reasons.

Arsenic and mercury levels are higher in gluten-free dieters

A new study performed by researchers at the University of Illinois at Chicago found a link between gluten-free diets and higher levels of both arsenic and mercury in the blood. Researchers, led by an assistant professor of epidemiology Maria Argos, analyzed just under 7,500 people. They participated in a health and nutrition survey between 2009 and 2014. The researchers found that 73 of these participants reportedly ate a gluten-free diet.

Researchers hypothesize that this might be the case because of the high content of rice in many gluten-free diets. Rice is often known to test positive for arsenic and mercury, if it is grown, watered or fertilized with these metals. Many gluten-free baked goods contain rice flour instead of wheat flour. Rice itself is often a staple grain on a gluten-free table.

“These results indicate that there could be unintended consequences of eating a gluten-free diet. But until we perform the studies to determine if there are corresponding health consequences that could be related to higher levels of exposure to arsenic and mercury by eating gluten-free, more research is needed before we can determine whether this diet poses a significant health risk.”

On the dangerous effects of arsenic exposure, the World Health Organization (WHO) writes:

“Long-term exposure to arsenic from drinking-water and food can cause cancer and skin lesions. It has also been associated with developmental effects, cardiovascular disease, neurotoxicity and diabetes.”

On mercury, the WHO explains:

“Mercury is toxic to human health, posing a particular threat to the development of the child in utero and early in life. Mercury exists in various forms: elemental (or metallic), inorganic (e.g. mercuric chloride) and organic (e.g., methyl- and ethylmercury), which all have different toxic effects, including on the nervous, digestive and immune systems, and on lungs, kidneys, skin and eyes.”

Arsenic and mercury are things you obviously don’t want to be eating in any significant quantity. However, they are both naturally occurring. Because of this, they can both be found in otherwise healthy foods such as rice. More research needs to be done. The term “safe levels” can also be tricky. The key is to be sure you’re not overindulging in foods that may contain these two metals.

What we can do

As far as arsenic exposure from food, Argos stated:

“In Europe, there are regulations for food-based arsenic exposure. Perhaps that is something we here in the United States need to consider. We regulate levels of arsenic in water. But if rice flour consumption increases the risk for exposure to arsenic, it would make sense to regulate the metal in foods as well.”

This would indeed make sense, and hopefully such regulations will be put into place on a national scale.

In the meantime, World’s Healthiest Foods has some tips on how to reduce the amount of arsenic in your rice. They explain that brown rice, though healthier, often has more arsenic than white rice, because the outer layer is not removed. They suggest rinsing the rice thoroughly to remove between 10 and 25 percent of the arsenic. Cooking rice in more water (a 6:1 ratio) can also help remove more arsenic. However, many nutrients may also be cooked off. The most important thing is to moderate the amount of rice you eat.

The good news is, there are plenty of other great gluten-free grains out there. Check out this article to learn about a few and then start searching for new recipes!