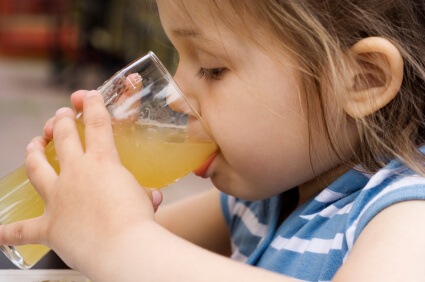 Arsenic is a byproduct of modern day farming practices and a reliance on pesticides and herbicides. Although it exists as a naturally occurring mineral, it is the onslaught of arsenic-infused chemicals that have brought levels to an alarming rate in some foods.

There are two ways that arsenic ends up in apple juice. One is by use of arsenic-based pesticides in orchards, and another is if the water used to make the concentrate contains the chemical.

In 2008, the Environmental Protection Agency lowered the permissible levels of arsenic in drinking supplies because of health risks. Research shows that inorganic arsenic can cause skin lesions, cardiovascular disease, diabetes, neurotoxicity and developmental difficulties.

With mounting pressure from consumer groups, the FDA, who has declared inorganic arsenic as harmless, has now put limits on the amount it will allow in apple juice. In what is being called by some a “reasonable step forward,” manufacturers have to keep arsenic levels below 10 parts per billion.

This level is down from the previously acknowledged “level of concern,” of 23 parts per billion, that was not based on any hard science, according to Michael Taylor, FDA deputy commissioner for foods. Taylor further goes on to note that the new number is based on a lifetime exposure to arsenic and the long-term cancer risk.

However, Caroline Smith DeWaal, director of food safety at the Center for Science in the Public Interest, does not feel that the FDA has yet chosen a standard that adequately protects the consumer.

Arsenic is found in our drinking water, in rice and in a number of other rice products. Consumer advocates have pressured the government to take action on arsenic found in other foods including rice and chicken.

Arsenic shows up in rice, grape juice, wine and even chicken. The government is currently taking samples of rice and rice products to assess existing levels of arsenic and comment on safety.

It is important to note that much of the apple juice in America actually comes from China, where environmental and health regulations are known to be lax, and with a less than 2% inspection rate on imported foods, much could be missed.

Here are four ways that you can help protect your family from unnecessary exposure to arsenic and other harmful chemicals in food.

Read Labels – Know where your food is coming from and what you are buying. Purchase food grown and processed in the United States only, and visit The Global Grocer so that you can learn about what foods are imported and from where.

Buy Organic – The organic certification program supervised by the Department of Agriculture requires that all certified organic food be produced under strict standards, and this includes not using synthetic chemicals.

Make Your Own – There is nothing like the taste of fresh pressed juice. Making your own apple juice puts you in charge of the ingredients so that you can ensure your family is safe. Purchase organic apples or grow your own.

If you are going to grow your own, be sure to test your soil for arsenic first, because it stays in the soil for decades. Nutritionists recommend whole juice, which includes the pulp, as there is more nutritional value in it. Just add some filtered water to the mixture to thin it out and drink it right away.