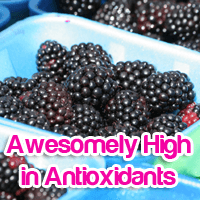 The blackberry’s sweet-tart flavor can be as addicting as its smartphone namesake. Native to Asia, Europe, and North and South America, it has been used as food, medicine, and as a thorny hedge to discourage intruders.

Also known as brambleberry, from “brambel,” meaning “prickly,” the blackberry was used curatively by ancient Greeks for gout and by the English, who applied the leaves topically to relieve burns. It’s even said that truces were called during dysentery outbreaks in the Civil War so soldiers could gather blackberry leaves to make a tea to ward off the intestinal illness.

The berries are plump with the protective antioxidants ellagic acid, quercetin, and anthocyanin (the compound responsible for their deep purple hue). A one-cup serving of blackberries provides half the recommended Daily Value of the antioxidant vitamin C and is a good source of dietary fiber, manganese and vitamin K–all in just 62 calories.

Blackberries top the list of foods highest in antioxidant phytochemicals, according to a study published in the American Journal of Clinical Nutrition. Several other studies also have shown that blackberries’ health-promoting compounds–ellagic acid, quercetin, and several anthocyanins–inhibit tumors in esophageal cancer cells.

Blackberry anthocyanins may also help protect against sun damage to the skin–(Phytotherapy Research, January 2012 and Journal of the Science of Food and Agriculture, February 2011).

Blackberries peak under the hot summer sun, plump and ripe with deep, even color and a juice that’s sweet with a tinge of tartness. Select only ripe berries; blackberries won’t continue to ripen once picked, but they will mold quickly unless refrigerated promptly, where they will last up to a week.

Popular in juices, jams, desserts and even wine, fresh blackberries are a versatile gem when added to most any dish, from cereals, yogurt and salads to smoothies, quick-breads, a savory soup or a sauce for lean poultry and meats.