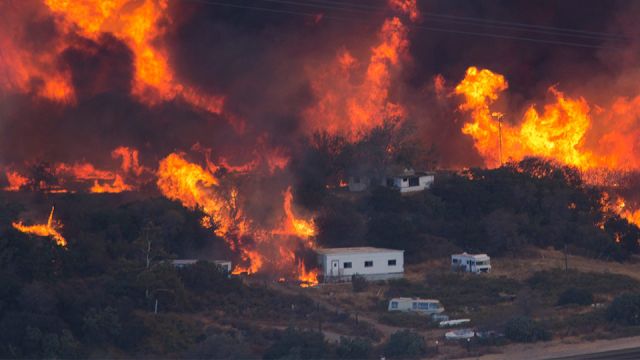 Sadly, there are 31 reported deaths so far from the rampant California wildfires, which makes this the deadliest week of wildfire in California state history. The fires are still burning in many areas across Northern California and over 400 people are still missing.

Most of the deaths are being reported in Santa Rosa, a heavily populated city with over 175,000 people. Here is an aerial video and picture to help grasp the devastation and seriousness of the situation:

According to recent reports, the fire in #California killed 31 people.I offer my sincere condolences to the families of those killed. pic.twitter.com/rb0zkEWrRG

Before and after photos show neighborhood destroyed by wildfire in Santa Rosa, California. https://t.co/9TgDCcvU0E pic.twitter.com/Hem11TsZ9g

One couple living in Santa Rosa, whose house eventually burned to the ground, decided that jumping in their neighbor’s pool was their only option for survival.

Jan Pascoe and her husband John were trapped outside of their home and had nowhere to run or hide to get away from the flaming hot inferno. “We are going to get into the neighbor’s pool, should we do this?’” Jan recalled asking a 911 dispatcher. “We were in survival move, what were we going to do?”

When they made the decision to jump in, their was a wall of flames around them in practically every direction. They had tried to leave in their truck, but felt like it was too dangerous to drive through the fire to escape.

Here’s a picture of Jan and John looking at their neighbor’s pool, which saved their lives:

This couple survived the firestorm that burned their California neighborhood to the ground by spending six hours in their neighbors’ pool https://t.co/uATmGQ7tjk pic.twitter.com/cL8kYSERrf

After calling 911 and explaining the situation, they were told that their best possible option would be to get somewhere safe and wait. They ran to their neighbor’s pool and stood by it until the last possible minutes, when they saw their neighbor’s largest tree burst into flames.

They put their wet shirts over their heads as a way to deflect the flames from burning their exposed skin. Fortunately, the pool was only four-feet deep, so they didn’t have to tire themselves out by treading water.

The pool was freezing cold, which could have ended up helping them. But for the six hours they were submerged, it was excruciatingly uncomfortable. They had to keep their bodies close to each other to help obtain the most amount of heat as possible, especially since their shirts were above their heads.

“I just kept going under,” says Jan. “And I kept saying, ‘How long does it take for a house to burn down?’”

Once they felt like it was safe to get out of the pool, all of their possessions they left poolside were completely melted or destroyed.

Aside from being a great example of the human will to fight at all costs for survival, the Pascoe’s story shows the struggle that so many people are unfortunately going through in the area. At time of writing, more than 2,834 homes and 400,000 square feet of commercial space have been destroyed.