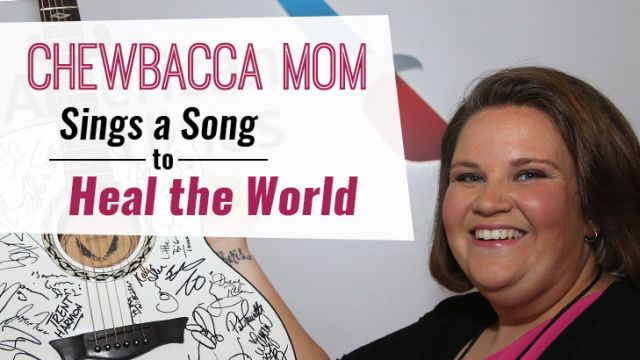 Whether you love her or find her adorably annoying, Candace Payne, a.k.a. Chewbacca mom from Granbury, Texas, wants the world to know that like us she too feels the pain from recent events that unfolded in Texas.

Best known for donning a Chewbacca mask, Payne decided to go viral once again by performing her version of Michael Jackson’s 1991 song “Heal the World“ in response to recent police shootings of black men and the attacks on Dallas police. But before covering the song Payne spoke out.

“I’ve been spreading joy, and I’ve been hoping to do that, but I found myself over the last couple days being silent because I’ve been so sad and so hurt by what’s going on,” Payne said on Facebook.

“I’m very nervous to just share this with you because it’s so vulnerable,” Payne said. “But I felt like someone needs to sing these lyrics again and sing them over our world and just be a good reminder.”

Although facing some backlash after posting the video, the 37-year-old mom still garners plenty of supporters and has over four million views to date. While some “Chewbacca mom” fans found her version surprisingly touching, others — not so much. After posting the video, one Twitter user said, “Sorry to be negative, but can #Chewbacca Mom please now leave the public stage??”

Much more than 15 minutes of fame

After appearing on “The Late Show with James Corden” and J.J. Abrams, Payne’s 15 minutes of fame was clearly not over. Recently Payne was honored by “toy giant” Hasbro, who created a figurine in her likeness. The action figure is all Chewbacca from the neck down, but features Payne’s smiling face and a tiny version of her favorite mask.

A Hasbro spokesperson told CNN that the figurine is loaded with 13 quotes from Payne’s viral video, including her now famous laugh and the line, “I’m such a happy Chewbacca!”

“Chewbacca mom” may not bring a smile to everyone’s face, but she’s certainly trying to make a better place through laughter and song. Some may find her annoying but truthfully, others could take a little inspiration from her passion. And, if that gets her a few minutes of fame, so be it — it could be so much worse.  What did you think? Is Candace Payne an inspiration or just annoying?