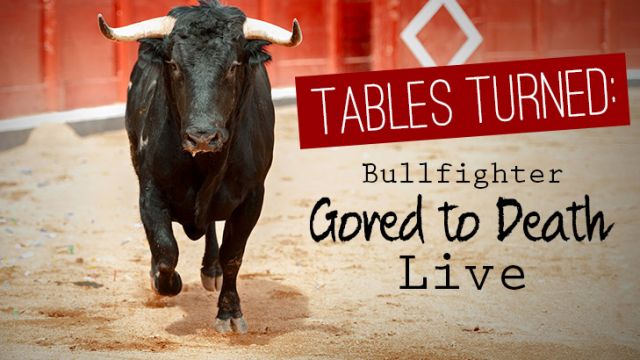 On Saturday, July 9, a bullfighter was fatally gored in front of a spectator audience while being filmed for live television during the Angel Fair in Teruel, Aragon, Spain. Spanish bullfighter Victor Barrio, 29, died from the wounds hours later.

After the bullfight, the television station broadcasted replay shots of the goring from various angles. In order to protect viewers, we haven’t included the video here. The bull used one of its horns to flip the fighter over at his thigh, stabbing him there, then tried to turn him onto his back, stabbing him through the heart and a lung in the process.

The bull had already been lanced and had two banderillas in his neck. The banderillas are used as part of the performance, and encourage the bull to continue fighting and to engage in long charges, as the fight enters its third stage. Then, the matador is meant to guide the bull’s charge in a series of passes, then kill him.

Bullfighting originated in Spain and parts of Europe, and was then brought to various Latin American countries with colonization.

A global movement is opposing bullfighting with the slogan El toreo es tortura, no es ni arte ni cultura – bullfighting is torture, not art or culture.

And that’s not an exaggeration. When a bull is prepared for a fight it is deprived of water and kept in the dark for two days, sometimes drugged, his horns are shaved down to disorient him, petroleum jelly is rubbed in his eyes to blur his vision and cotton may also be stuffed in his nostrils and needles in his genitals.

He never stands a chance against the matador. In fact, its been 30 years since a matador was last killed in Spain.

During the “fight” the bull is stabbed multiple times, slowly bleeding to death as he’s chased and vomiting. When the bull gives up and lies down, not necessarily dead yet, his ears are often cut up as trophies, and he is dragged around the ring by mules.

Bulls and cows are naturally very gentle and peaceful, as seen in this footage of a bull that was rescued from bullfighting. That means that Saturday’s death was really man-made.

Other sports that use animals for entertainment are more popular in the United States. Many of these sports teach people and children that violence is fun and acceptable, and to devalue animals.

Here, the dogs and cocks are also “prepared” to fight: deprived of food, drugged and beaten to make them aggressive. The animals usually fight to the death, with people placing bets on a winner.

Left on their own, roosters rarely hurt each other. But the Humane Society reports that during a fight, the birds often wear razor-sharp blades on their legs and incur injuries like punctured lungs, broken bones and pierced eyes.

In dog fighting, the dogs are isolated from other dogs and from people: unsocialized and kept on heavy chains. Sometimes the dogs are trained in play fights with other dogs, but the amount of “investment” and time that goes into their preparation depends on the level of professionalism and the amount of money involved.

Cockfighting is only a felony in 40 U.S. states. In the remaining states it is a misdemeanor.

Likewise, laws around dog fighting vary from state to state: with it being illegal in every state, but being a spectator is only a misdemeanor in most states. The ASPCA estimates that “tens of thousands” of people in the U.S. are involved in dog fighting.

According to One Green Planet, in the horse racing industry, horses are viewed as “nothing more than commodities,” and abused by their trainers. PETA asserts that some horses are given drugs to speed up their metabolisms, as well as furosemide, a diuretic that stops pulmonary bleeding during intense exercise: allowing them to push through otherwise exhausting sessions and races.

The New York Times reported that 24 horses die a week on the tracks in the U.S. Part of the reason is that the horses are bred to run 30 mph, rather than to survive. They are bred to have large muscular carriages and small ankles, meaning their bones often break and they are put down.

While duck and goose hunting involves no torture in the lead-up to the sport, it still usually involves killing animals for fun, rather than for food. Often other bird species are killed by accident. Also, computer simulations estimate that duck shooters leave at least as many birds wounded as they kill and capture. Injured birds can spend a long time suffering before they eventually die.

Canned hunts are legal, and a big business in the United States, with an estimated 1,000 game reserves allowing hunters to pay thousands of dollars to kill bison, deer, African antelopes, and turkeys – among other animals.

What can we do? We can boycott industries that make money out of the cruel treatment of animals, and raise awareness about them.