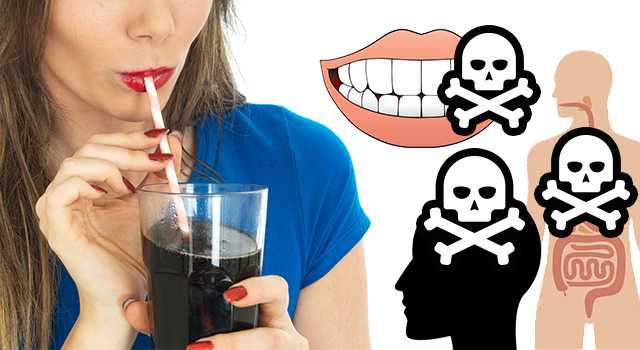 By now, most educated people are well aware that diet soda is a horribly harmful thing to put in your body. Courtesy of billions upon billions spent on advertising, the Coca Cola company has enjoyed decades of popularity and even more billions of dollars in sales. But with increasing access to scientific studies and unbiased information, we’re no longer fooled by those sun-kissed bikini bodies and good times supposedly had simply by opening a bottle of soda.

I have no hesitation in stating just how horrible diet soda really is — hundreds, perhaps thousands, of peer-reviewed studies and lab tests back up my claim. There’s just no doubt that every drop of soda you put in your mouth is doing some serious damage to your health.

Why, then, are people drinking this stuff for breakfast? If the rumors are to be believed, millions of Americans still choose to crack open a bottle of Diet Coke in the early hours in place of a hot cup of (sometimes nourishing) coffee. Following on an apparently highly successful late-80’s campaign called “Coke in the Morning,” it appears that the Coca Cola company is not only ruining our afternoons and evenings, but ruining our mornings as well.

1. Your teeth are corroded

Everyone has tried, or at least had a friend who tried, putting an old green penny in a glass of diet soda. A few hours soaking in soda, followed by a quick buff, and that coin looks good as new. That’s because the chemicals in the soda dissolve the oxidized copper on the outside of the penny, making it sparkle.

Unfortunately, the same result can’t be said for your teeth. Ten minutes after drinking diet soda in the morning, the phosphoric acid begins to break down the enamel on your teeth. Unlike the green oxidized copper on the outside of that penny, your teeth need that enamel to protect them from corrosion and infection.

Studies show that after consuming diet soda or regular soda, the high levels of phosphoric acid in these drinks begins to dramatically lower the amount of enamel present on your teeth. In a study published this year, researchers showed that immersing a tooth in Coke for just one hour was enough to dissolve five percent of the enamel on that tooth. If that’s just one hour, imagine what drinking diet soda every single morning is doing to your enamel!

2. The aspartame confuses your digestive system

Our digestive system operates on a case-by-case basis. When the taste receptors in our mouth sense something fatty, for example, they tell the pancreas to begin producing more bile to enable faster breakdown of fatty compounds when they reach the stomach. The same is true for sweet foods — glucose receptors in our mouth tell our digestive tract that sugary compounds are on their way, enabling our digestive juices to gear up for some serious carbohydrate metabolism.

Aspartame, as an artificial sweetener, tricks our tastebuds into thinking we’re consuming something sweet. While this means we’re consuming less actual sugar, it also means that we’re tricking our bodies into digesting something that isn’t actually sugar every time we drink diet soda in the morning.

An article published in the Journal of Trends in Endocrinology & Metabolism examined the role of aspartame in the body, finding that beverages (like diet soda) that contain it interfere “with learned responses that normally contribute to glucose and energy homeostasis.” The result is that our bodies are no longer prepared to break down real sugars when they are consumed, setting us up for metabolic “derangements” and cardiovascular disease.

3. Your gut microbiome is thrown off course

A 2014 study studied the effect of aspartame, the ingredient in diet soda that gives it that “sweet” kick, on the human gut microbiome. Researchers found that aspartame was rapidly metabolized by certain gut bacteria, promoting the growth of certain “bad” bacterial species and a subsequent decline in insulin sensitivity. Considering the goal of diet soda is to reduce the likelihood of developing insulin-dependent conditions like diabetes, this seems very counter-intuitive indeed.

4. You put on weight

I’m constantly baffled by overweight people that tell me they’re dieting or trying to lose some pounds, who I then see glugging back a can of diet soda in the morning. They’re either in denial, or are under the very misguided impression that the “diet” in diet soda means it’s something like weight loss in a can. In reality, however, that’s just very smart but exceedingly false marketing.

You see, the aspartame in diet soda is actually setting you up for even greater weight gain than if you were drinking a regular can of soda in the morning. Research shows that drinking beverages containing artificial sweeteners like aspartame significantly increase your risk of type 2 diabetes, inflammation, high blood pressure, heart disease and metabolic syndrome… all of which can contribute to significant weight gain.

Not only that, excessive diet soda consumption can even cause epileptic seizures. Still sound like a good morning beverage?

As a nation, we’re absolutely obsessed with the evils of drug and alcohol addiction. What we don’t realize is that there’s another addiction, just as harmful in its implications, taking place every single morning: diet soda.

The heady mix of caffeine and aspartame in diet soda has been shown to create a temporary addictive high similar to the effect from cocaine usage. Upon drinking diet soda in the morning, excitotoxins are released in great numbers, exhausting your brain by overstimulating its neuroreceptors. The result is that, whether you know it’s happening or not, you need to reach for that next can of diet soda to temporarily banish that post-high exhaustion… which is precisely the definition of addiction.

Those who drink diet soda in the morning will increasingly find that they literally can’t start their day without it. It’s a slippery slope into full-frontal addiction.