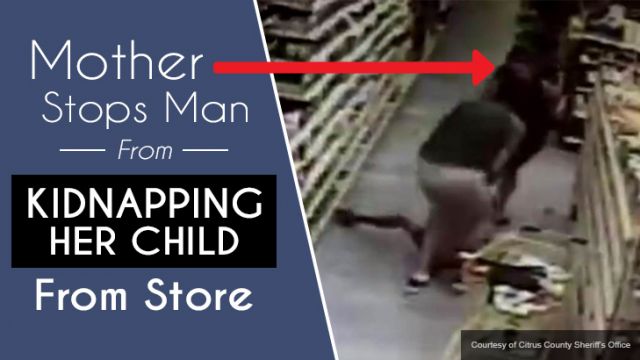 It’s not every day that an attempted kidnapping has a happy ending. A man named Craig Bonello attempted to kidnap a 13-year-old girl shopping with her mother at a Dollar General store in Florida. In the video below, the man appears to be going about his business at first. Then he stops his cart, walks over to the girl and attempts to drag her, kicking and screaming, out of the store.

Luckily, her mother was able to follow closely behind and eventually, as the video shows, tackle her child and use her own body weight to prevent the girl from being dragged out of the store. Call it motherly instinct or quick thinking, but she didn’t flinch in her drive to protect the girl. One might wonder if the sheer shock of such a brazen daylight kidnapping would steal a few seconds before a person could process a situation like that, but this mom jumped right in.

When Bonello realized he was defeated, he attempted to flee the store. In another lucky break, off-duty Deputy Jonathan Behnen happened to be outside. Behnen was able to prevent Bonello from leaving, remove him from his car and ultimately place him under arrest.

While it’s certainly impressive to see the mother spring into action so quickly, what’s even more interesting is the broad daylight attempt. According to authorities, Bonello has a record but no history of kidnapping or sexual assault. However, during the press conference, the sheriff said that Bonello told authorities he had done this before. Nobody was found at his home, so his claim was not confirmed.

Regardless of his criminal past, what was Bonello aiming for here? Did he think he would be successful with this many people around? Perhaps he snapped? The video is so startling that you can’t imagine Bonello thought through the most likely outcome — the mom or someone else protecting the girl. A member of the press mentioned Bonello’s possible mental state, but authorities hesitated to make any claims and communicated that these types of questions will be answered as the case unfolds.

Fortunately, the mother was able to play a role in stopping her own child’s kidnapping and Deputy Behnen was in the right place at the right time. As for Bonello, Tampa Bay’s Channel 10 News reports that child abuse and kidnapping charges are in his future. Hopefully, a court will be able to prevent him from hurting any other children.