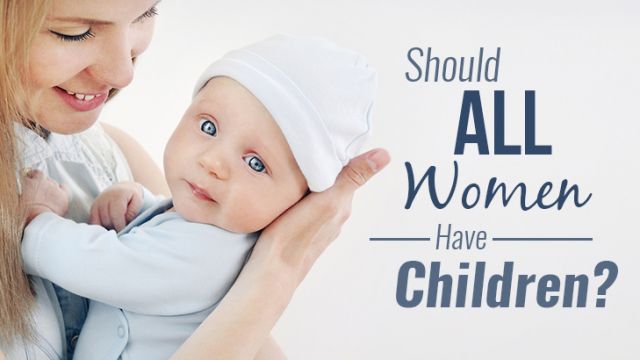 I was eight years old when I decided I didn’t want to have kids. I was at the swimming pool, watching kids run around, and I understood then that I wanted to be an artist or a writer and do something good for the world.

Since then, I’ve faced all sorts of pressure to have children, though I suspect much less than most women. There was the teacher in high school who told me I was “made for having children” because of my body shape, and the friends who told me I was selfish for not wanting to. Hollywood and the media give the impression that the peaks of a woman’s life are getting married and getting pregnant (while avoiding any profound look at the complex process that follows both those events). Doctors, on multiple occasions, tried to scare me over my birth control choices, saying they caused infertility or increased the risk of it — even though they didn’t and though I said that outcome was fine with me.

“What if you change your mind?” they would ask. Women often get vastly different advice based on who they are. Doctors would never talk to a parent that way, for instance. Meanwhile, mothers were poor, young or black are told to avoid pregnancy — but more on that later.

My family life wasn’t great growing up, and I think that was a small part of my decision. Yet I’m in love with kids and their wild creative ways and ended up being an alternative education teacher (teaching kids to think and cooperate, rather than obey) and writing a novel, among other things. For those who called me selfish, it isn’t that. It’s that I thought my contribution should be something else.

Then there is pressure from family, religion and education. There are studies that try to tell us what age we should have children by. A Japanese politician, Yoshihide Suga, recently told women to “contribute” to the nation by having lots of children, and other politicians from the United States and Europe who have at some point expressed similar sentiments. These are nations with rapidly aging populations, so politicians want more taxpayers to fund the cost of those who are aging. Poor planning, however, is no reason to put the burden on women to “fix” public budgets.

Australian politician Mark Latham, for example, commented recently on a woman who was both studying medicine and raising two children, saying the only way she could “cope” was through “caffeine and anti-depressants.” In this case, he thought the woman shouldn’t have had children.

What a lot of (usually) male leaders don’t understand is that what a woman does with her uterus, and her life, is her own business. Further, a woman isn’t just a uterus. A woman is much more interesting than that, and she comes in around 4 billion forms, not one of them fitting into the boring definitions of what a woman should be and do that those in power promote.

If you have two legs, you may decide to be a runner. But just because you have two legs doesn’t mean you’re obliged to be a runner; the same applies to women and their wombs. Hell, not even all women have wombs and not all can physically have children for various reasons, but that’s no reflection on their identity.

Life is full of surprises. I certainly never expected to be a godparent — defined by my friend as just being a good friend to a new baby. She is an incredible mother, dedicated to the job as much as any hardworking scientist. She’s a trained doula, she supports other mothers, she’s an encyclopedia of humble knowledge about how kids learn, disciplinary techniques and health, and every day she comes up with creative new activities and recipes for her children.

To give birth to a child and raise one, or more, is to give birth to a new possible world. Parenthood isn’t a “trap” when it’s not forced. It isn’t a “bad career choice.” It’s a full-time and very serious, important job. It’s one of those processes in life where love can become very creative.

“Children are the ways that the world begins again and again,” wrote one of the authors of Revolutionary Mothering. For some, having children can awaken in them the urge to fight for a safe and just world.

Maybe one day I’ll raise children — perhaps adopted children, perhaps jointly with a partner or with various people. I’d want to ensure though that we could be the cooks, teachers, psychologists, cleaners and nurses that a child needs. I’d want to prevent global warming for children and get rid of destructive social inequality.

I’d want to do an incredible job. People do change their minds, but let’s not assume that everyone will change their mind to fit the rigid and boring life template we’re encouraged to follow.

Are there some women who shouldn’t have children?

There are a number of myths around who makes a good mother and what conditions are best for child rearing. For example, Prospect America points out that it’s not true that teenage mothers are poorer because they had children at an early age. Had they not had children they would probably have been just as economically dependent due to their social circumstances.

While some women can’t raise children, perhaps because of a mental illness, a drug addiction or other reasons, most arguments that certain women shouldn’t have children abide by similar presumptions to those arguments that women should. When people suggest that poor women, refugees, the disadvantaged or discriminated against shouldn’t have children, they deny the ability of women to make intelligent decisions about their own lives.

They see women as the cause of problems, rather than the inequality and social conditions the women live in and the lack of infrastructural support. While economic resources are one factor to consider when raising kids, what about other essential factors, such as emotional strength, community, creativity and culture?

What about, instead of regulating and commenting on people’s private lives, those in power recognize the huge impact that inequality and discrimination can have and do something about it?

The president of Turkey, Recep Tayyip Erdoğan, recently said, “A woman who says ‘because I am working I will not be a mother’ is actually denying her femininity.” Often the most judgmental statements about how women should be — about our clothes, what makes us attractive, our cooking and home life, how we should be mild-mannered and stay out of politics and comedy and anything involving a strong opinion — come from men who seek to limit us, to keep us in our so-called place, and thereby maintain their own power and advantages.