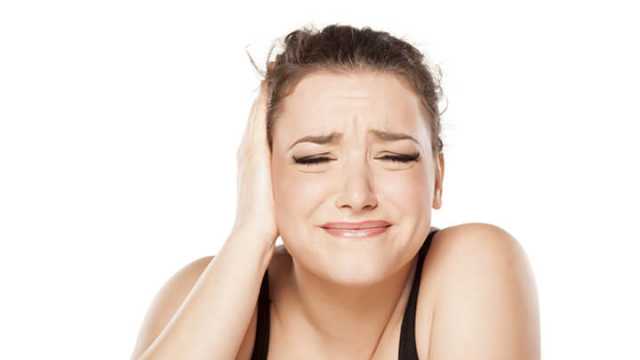 Anyone who has experienced ear pain knows how awful it can be. It’s a type of pain that can be pretty relentless. And for relief, many of us turn to anesthetic drugs and analgesic ear drops. But that may not always be the healthiest option, as these medications may cause side effects.

Some analgesics may lead to burning, stinging, redness, new pain in and around the ears, and in rare cases, even more severe symptoms like severe tiredness and weakness. Antibiotics may also be used to treat ear infections. Most notably, antibiotics can lead to stomach pain, rash, headache, nausea, vomiting and diarrhea. They can negatively impact your digestive health as well. Plus, antibiotics kill both the “bad” and “good” bacteria in our bodies, like the flora found in the gut. Furthermore, many ear infections are caused by viruses, not bacteria, in which case antibiotics will not be helpful.

This is even more distressing when we consider that children tend to have higher rates of ear infections than adults. So especially when a child has repeated ear infections, they may be exposed to these medications more than once.

Pharmaceuticals aren’t the only option. One study found a five-ingredient, natural remedy to be just as effective as anesthetic ear drops for treating the pain associated with acute otitis media — the inflammation of the middle ear area that may be related to an ear infection.

The five ingredients are:

The study looked at 103 children between the ages of 6 and 18 who had been diagnosed with acute otitis media. The children were divided into two groups, one of which was treated with anesthetic ear drops, and the other with drops made from a combination of the five ingredients. At the end of the observation period, both groups reported similar reductions in pain. The natural remedy, therefore, was determined to be just as effective as the ear drops.

So what is it that makes these five ingredients so potent? Let’s break it down.

The natural remedy includes garlic because it has powerful antimicrobial effects. One study found that allicin, a compound found in garlic, has antibacterial, antifungal and antiviral properties. So if the ear pain is due to an infection, garlic can be used to treat it in a much gentler way than pharmaceutical antibiotics. One summary of a number of studies demonstrates that garlic has anti-inflammatory effects, as well. So even if the pain is not do to an ear infection, garlic can still be useful in treating it. 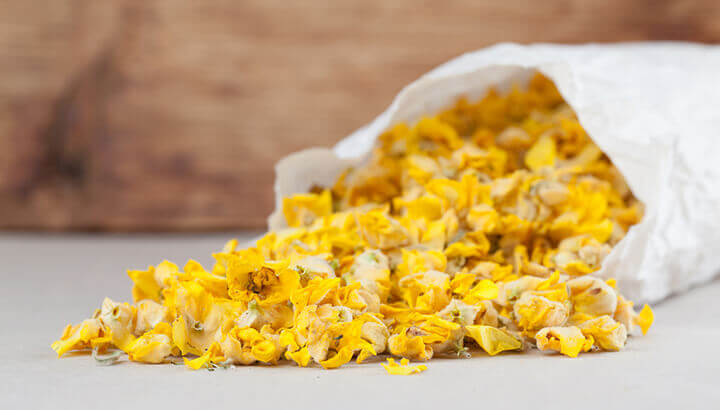 Mullein is the name given to any of the more than 300 species in the genus Verbascum. Like garlic, mullein is believed to have antiviral properties. One study showed that it had an antiviral effect on several strains of influenza A and B, as well as the herpes simplex virus. It also has anti-inflammatory effects, and can therefore be used to treat both the infection and the inflammation, similar to garlic. It is important to note that, although mullein can often be found growing on roadsides, it is not recommended to use mullein found in such places for medicinal purposes. Roadside mullein may have been exposed to pesticides and other toxins.

You’ve probably heard about the many health benefits of St. John’s wort. It has been used to treat the symptoms of everything from depression to PMS. It is anti-inflammatory, but for different reasons than garlic and mullein. St. John’s wort has inhibitory effects on proinflammatory genes, making it effective at relieving inflammation and a host of related health conditions. It also has antiviral and analgesic properties. However, it is important to note that it can interfere with certain medications, including birth control pills. So if you’re taking any prescriptions, you will want to consult your physician before adding St. John’s wort.

We know that olive oil has a range of health effects when included as a regular part of your diet, largely due to the fact that it is a good source of omega-3 fatty acids. But the benefits don’t stop there. Olive oil contains polyphenols, which are effective at reducing inflammation. This makes olive oil a good choice as a base for a number of natural healing salves and lotions. And this study found that virgin olive oil has antibacterial properties as well, making it even more effective at treating ear pain caused by an infection. 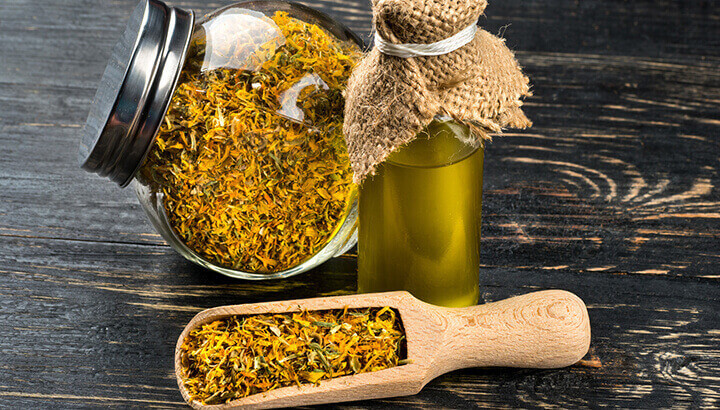 Calendula contains antioxidants known as flavonoids, which protect against free radical damage, as well as inflammation promoting compounds like C-reactive protein. It also has high concentrations of linoleic acid, which is anti-inflammatory. Also, the acids in the plant’s oils have antimicrobial and antiviral effects. They are believed to be effective in fighting pathogens and candida. Calendula has a wide range of other health benefits. It can help to improve oral health, discourage cancer, treat muscle spasms and more.

The decision to try a natural remedy before taking antibiotics or other medications is a wise one. There are also dietary approaches to help you avoid future ear pain and inflammation, like cutting down on gluten, for example, which can be inflammatory.

Of course, it’s important to note that ear pain — and especially ear infections — can be serious. If your symptoms do not improve, it is important to consult a medical professional, especially in the case of a child. And if you are taking any medications, be sure to speak with your physician before using this natural remedy, as some of the ingredients may cause interactions.