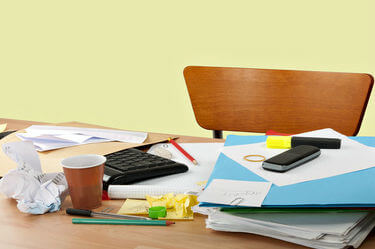 There’s one in every office. That lone individual whose desk resembles a war zone with stacks of papers piled high, an array of crooked photos tacked haphazardly to the cockeyed corkboard and sticky notes of multiple colors posted along every viable surface.

Yep, it’s the office slob. They have granola bars in their desk drawers, birthday cards from decades past sprawled from corner to corner and so many papers lying around it looks like someone butchered a tree on their desk.

Fellow officemates whose desks are the pinnacle of organization cringe as they walk by. But is there really an advantage to being neater? Surprisingly, it may not be all that bad to be a little sloppy.

Cleanliness and tidiness are often associated with better health, higher levels of success and greater productivity, illustrating the stereotype that organized individuals are just all around better people. And they know it too.

Who hasn’t seen the neatniks turn down their noses at the clutter-keepers of the world? In one study individuals who considered themselves cleaner were found to be far more morally judgmental of others than their less-than-pristine counterparts.

But do they have a right to be?

A recent study  performed by researchers at the University of Minnesota says maybe, and maybe not.

Researchers placed three groups of college-aged students in either a messy or organized office space and monitored their actions. In one situation, students were asked to fill out questionnaires unrelated to the study.

When finished they had the option of selecting an apple or a piece of chocolate on the way out. Those who worked in the tidier environment were twice as likely to select the apple as those who worked in the messier office. This finding adds credence to the claim that organized people tend to eat healthier.

However, in another portion of the study, students were given a choice of a “new” smoothie that contained an added “health boost” or a “classic” smoothie for lunch. A majority of students in the neater environment selected the “classic” smoothie while the ones working in the messier office were far more comfortable taking a chance on the “new” health-boosted smoothie.

This willingness to try something new, when related to foods or exercise routines, can in many cases have far more health benefits than for those who never change up their routine.

Finally, in another situation, the students in both office environments were asked to develop new uses for ping pong balls. The students in the messier environment were able to concoct far more imaginative uses than those in the organized office, illustrating that perhaps there is a link between a more casual environment and creativity.

The findings illustrate that while there definitely is merit to being organized, there is also benefit to having a sloppier nature as well. Those whose desks resemble the war zone may not make the greatest accountants in the world, but their creativity and courage to step out of the box offers many healthy advantages.

Bottom line is, if you’re a neatnik and finding yourself stuck in a rut, go ahead and leave a few papers scattered around. It may just spark your imagination.