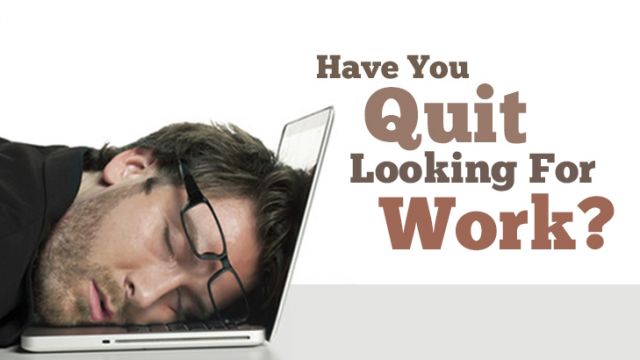 More than four in 10 Americans (43%) to some degree have stopped looking for work. While a small survey sample, recent survey results raise a lot of questions about the economy and our faith in the long-running — but very slow — economic recovery.

The poll asked people to assess how much they agreed with the statement “I’ve completely given up on looking for a job.” Of those who responded:

Note that results from this poll often compile all gradients of agreement into a single “agree” category, both here and in other reports and analysis of the poll. Rounding and multiple choice factors mean results may not equal 100.

The numbers lend credence to the theory that U.S. unemployment rates are artificially low due to a rise in would-be workers who have simply stopped looking. People not actively seeking employment are not considered unemployed, so data on joblessness can seem more positive than the underlying reality.

Working for a living

Put another way, the national unemployment rate is 4.7%, well below the 5.2% that economists believe is “full employment,” that is, the point at which everyone who wants a job has a job. Because a large, ill-defined number of Americans aren’t looking, the actual jobless rate might be higher.

The 2016 Harris poll can be easily compared to results from a comparable Harris poll released in 2014. That year 47 percent of respondents had stopped looking for work.

Other comparisons between the two polls paint a relatively sunny picture: 48 percent of those polled this year hold themselves accountable for their own unemployment, up from only 36 percent in 2014. The percentage of unemployed Americans blaming a poor economy for their predicament has dropped from 45 percent in 2014 to 34 percent today.

Twenty-two percent of those surveyed are unemployed because they quit their previous jobs, and 32 percent were laid off.

Meanwhile, two-thirds of respondents (66 percent) agreed with the statement “I don’t apply for jobs that offer minimum wage because it’s just not enough to pay the bills.” Most (83 percent) were willing to accept part-time work, compared to 93 percent in 2014; 45 percent were willing to take any job; 34 percent were looking for a stable company to work for even if it meant a lower salary; and 21 percent would not accept a job that didn’t pay more than their previous wage.

Only 63 percent have applied for lower-level jobs than their previous employment. All this begs the question: How are people surviving? The poll provides some insight:

Respondents were asked to choose between Clinton (27%), Sander (26%), Trump (23%) or None of the Above (19%). While one can surmise that respondents skew Democratic, it is hard to decipher whether this is a significant or minor attribute. The 19% choosing None of the Above may support Cruz, O’Malley or simply be politically indifferent.

One-third (33 percent) of those surveyed were between the ages of 18 and 29 and 20 percent were between the ages of 30 and 39. Overall, they were optimistic, as 81 percent agreed at least in part with the statement: “I’m confident that I will find a job I really want in the next six months.” Finally, 91 percent agreed that they were hopeful of the same.

Have you quit looking for work? Do you believe that you might find a job that is suitable in the near future?