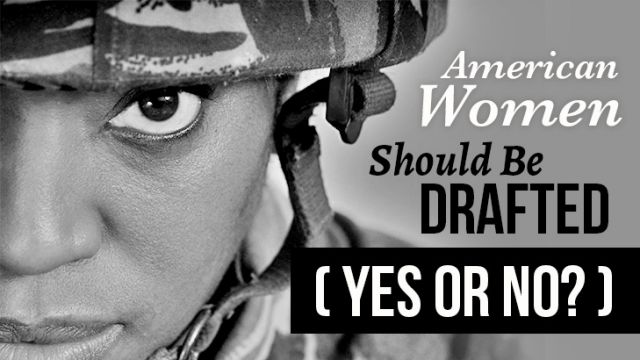 Women have made momentous strides in the U.S. military. For the first time, women have successfully completed the U.S. Army Ranger School. In addition, the military has welcomed the Army’s first female infantry officer, the first Marine enlisted infantry women and the first woman to hold a combat command. Another historic first may soon transpire, as Congress debates whether women should be included in the draft.

As a society, are we ready for women to be drafted? The U.S. military is taking gradual steps toward equalizing military duties between men and women. In the early 1990s, Congress lifted bans on women flying in combat and serving on combat ships. In 2010, the Navy changed a policy prohibiting women from serving on submarines. More recently, the Pentagon implemented changes to allow women to gain increased combat experience.

Due to the nature of modern warfare, women already serve in combat roles. But many argue that their service is not officially recognized, which impedes their professional advancement and access to benefits.

Critics of women in combat units cite physiological differences between men and women that could potentially affect military readiness and unit effectiveness. Others point out that opening all military occupations to women emphasizes equal rights, and that it’s more difficult for service members to advance to top-ranking positions in the armed services without combat experience.

“The fact is every single leader in this country, both men and women, members of the military leadership, believe that it’s fair since we opened up all aspects of the military to women that they would also be registering for Selective Service,” says Sen. John McCain (R-Ariz.), chairman of the Armed Services Committee.

All is not fair in love and war

The United States has not used the draft since 1973, during the Vietnam War, and it’s likely that there may never be a draft again, since the United States now has the strongest military force on earth. Regardless, the move to include women in the draft is a bold step toward finally achieving equality between the sexes.

Researchers need to continue to address sexual trauma, PTSD, effective treatment options and further research the link between mental health disorders and PTSD. More research also is needed on how trauma and PTSD impact family and occupational functioning for female veterans after their return from operational deployment and completion of military service, suggests a military review.

Are women on par with men in combat?

There’s a huge difference between women who actively choose to enlist versus those who have no connection to the military. Some argue that including women in the draft based on the performance of the few women who graduate from Ranger School is crazy. Clearly, their drive and physicality is far superior to that of the average woman and even most men.

Yet modern weapons have leveled the playing field for women in combat, and wars are far less likely to be fought on a hand-to-hand basis. When compared to men, properly trained women could perform successfully in combat.

The larger question remains: Does anyone really want young men or women drafted and sent to war? Proponents may argue that it’s a civil duty for every citizen to protect his or her country. But not all men and women, based on their morals, beliefs or physical strengths, have the desire to go to war for their country — or would even make good soldiers, for that matter.

If the draft is ever reinstated, however, should women be included?