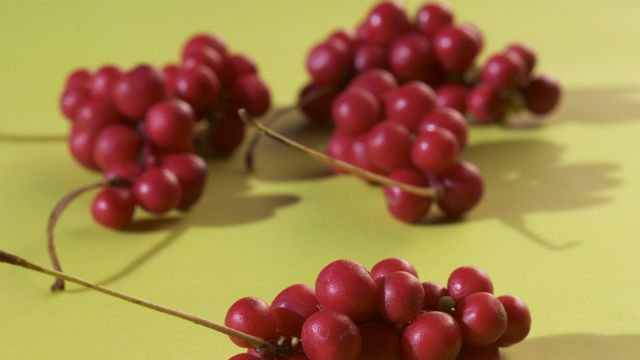 Schizandra berries aren’t like blueberries, blackberries, or superfruits like goji and acai berries. Its name sounds rather exotic, or like something you’d see on a tour of Willy Wonka’s Chocolate Factory, but it’s actually a sweet, sour, salty, bitter and pungent berry that isn’t eaten, but rather taken as medicine.

It’s been used for more than 2,000 years in China, where some claim that it helps revive the body from stress and fatigue, but it’s still relatively unknown in the U.S.

Most schizandra berries are dried in the sun and used in various formulae to help improve vitality, while some are deep refrigerated and eventually used to make health juices, mainly in the Korean market.

They can be found here in the United States as supplements online and in health food stores. Schizandra berries are considered to be an adaptogenic, which means that they are safe, non-toxic and offer a wide range of health benefits, including mental and physical stress reduction.

The berries are known for helping to prevent mental fatigue while improving the ability to focus and concentrate. They also have a direct positive effect on the central nervous system, acting as a stimulant when you need a lift while serving as a mild sedative when you’re feeling anxious or nervous. Schizandra berries have been shown to raise the body’s amount of enzyme glutathione, which helps to detoxify and improves mental clarity.

A number of human studies have found that schizandra extract can also increase the accuracy and quality of work, demonstrating superior mind-sharpening ability.

According to Memorial Sloan-Kettering Cancer Center, studies on rats have shown that schizandra berries help to protect the liver from toxins by using the fat soluble ingredient found in the seed’s core. Schizandra is also one of the only herbs known to have the ability to clean the liver of toxins as well as to cleanse the blood of waste so that is can be safely transported out of the body.

A 2009 study found that the berries may offer anti-cancer properties by inhibiting cancer cell growth in cancers like leukemia.

Schizandra is believed to stimulate the production of the antioxidant glutathione to help prevent damage to cells caused by intense physical activity, making it an excellent supplement for athletes.

The extract of the schizandra has also been shown to improve endurance and overall performance in long distance runners, skiers and gymnasts, making it an important staple for many Chinese athletes. Studies involving long-distance runners found a 25 percent improvement using Schizandra versus a control group that used a banned performance enhancing substance.