A significant amount of research performed in recent years has been exploring the scientific validity of traditional remedies in combating chronic disease.

One of the latest of these studies has found that Tripterygium wilfordii Hook F, an extract from the Chinese thunder god vine, also known as lei gong teng, worked as well as the drug methotrexate at relieving the inflammation and joint pain of rheumatoid arthritis.

The thunder god vine is native to China, Korea and Japan. While most of the plant is poisonous, the extract of the skinned root has several traditional medicinal uses. In China, it is an approved treatment for rheumatoid arthritis, an autoimmune illness characterized by painful and swollen joints, especially in the hands. This extract is also used in folk remedies for other autoimmune conditions including multiple sclerosis and lupus.

The new study, published this year in the journal Annals of the Rheumatic Diseases, split 207 rheumatoid arthritis patients with an average age of 51 into three groups. One group received 12.5 milligrams of methotrexate (a common drug prescribed for this condition) once a week, a second group received 20 milligrams of Tripterygium wilfordii Hook F (TwHF) three times a day, and a third group received a combination of these two treatments. The study lasted for a span of 24 weeks.

After 24 weeks, the researchers calculated how many of the 174 remaining participants had reached an ACR 50 response, which signifies a 50 percent improvement in rheumatoid arthritis symptoms.

In the TwHf group, 55 percent of the patients had reached this level of improvement. In the methotrexate group, the result was 46.5 percent. Furthermore, 77 percent of those in the group combining both treatments reached the ACR 50 response.

The researchers noted that the study was limited to a short time frame, and that the methotrexate dose was lower than is usually administered in the West (the dosage given is standard in China, where the study was performed), however, the thunder god vine extract appears quite promising, and shows great potential for further study. The researchers also noted that this extract has been linked to potential promise in combating cancer and other autoimmune diseases.

A word of caution: thunder god vine extract is very potent, and not a natural remedy to be taken lightly. It has been linked to several side effects, including digestive disturbances, upper respiratory tract infections, headaches and skin rashes.

It has also been linked to irregular periods and temporary infertility in women, and to potentially decreased male fertility. Long-term use (5 years or more) has been associated with decreased bone mineral density in women. 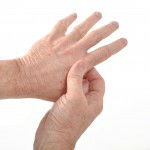 While these side effects are certainly unsavory, they are actually milder than those linked to methotrexate, which is commonly prescribed under the brand name Rheumatrex. Among the side effects listed for this drug are liver problems, lung and skin infections, mouth sores, damage to unborn babies, bone marrow reduction (which can compromise the immune system) and potential for tumor development. Some of these symptoms may be fatal.

If you are interested in learning more about thunder god vine extract and exploring its potential therapeutic options, talk to a natural health professional – you don’t want to experiment with this one on your own. It can also be hard to find this extract in the US, but a professional may be able to steer you in the right direction if you determine it is right for you.