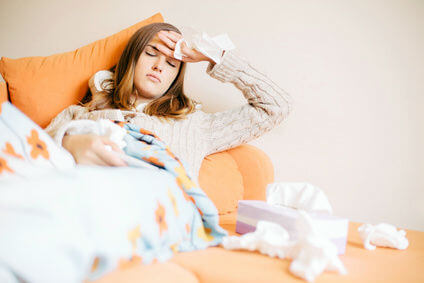 It happens every year. The seasons change, the kids go back to school and cold and flu season hits full force. Even if you eat healthy, exercise and take precautions to wash your hands frequently, sooner or later you are likely to succumb to a virus.

It may start with a minor sniffle, or hit you like a truck. And even though you may want to crawl right back into that warm inviting bed, many people decide to tough it out and go about their daily lives. And that often means sending the kids to school and heading into the office.

But researchers from the University of Arizona recently found that while you may think you are doing the admirable thing by working through the illness, you, and everyone else around you, really would be better off if you just stayed home.

When researchers placed droplets containing artificial viruses that mimicked the cold, flu and stomach bug on employees’ hands, they found that after only 4 hours half of all the surfaces in the office were carrying at least one of the artificial viruses.

Common belief is that most people catch a virus when someone coughs or sneezes in the air. However, the most frequent transmission of germs is via surfaces. In fact, 80 percent of viruses are spread by touch.

In the workplace these germ-laden hotspots include telephones, refrigerator handles, doorknobs, photocopier buttons and coffee pots. For children in school, especially the youngsters who lack proper hand-washing techniques and can’t resist the urge to put fingers, pens and anything else within reach in their mouths, one sick child can infect an entire classroom within minutes.

And even though you may think you aren’t contagious yet, think again. As soon as you feel that first tickle in your throat, you can spread the virus to others. In fact, you are most contagious within the first two days of experiencing cold symptoms. And it’s true that the common cold probably won’t kill you, however the flu is an entirely different story.

The Centers for Disease Control and Prevention recommend staying home from work if you think you may be coming down with the flu and to remain home for at least 24 hours after your fever is gone.

Unlike a cold, you can be contagious for seven days after you develop symptoms. And while you may fight the infection fine, others may not be so lucky and can develop serious complications.

In the case of stomach bugs, unlike-short lived cold viruses, these are a little harder to avoid. When the infected surfaces were swabbed hours later, many of the cold and flu viruses were gone, however the stomach bugs were alive and well on 70 percent of the surfaces. And unlike a cold where you’re only contagious for a few days, you can still pass on stomach viruses for up to two weeks after you’ve recovered.

So this year when you start to feel a little under the weather, do yourself and everyone else a favor and just stay home.