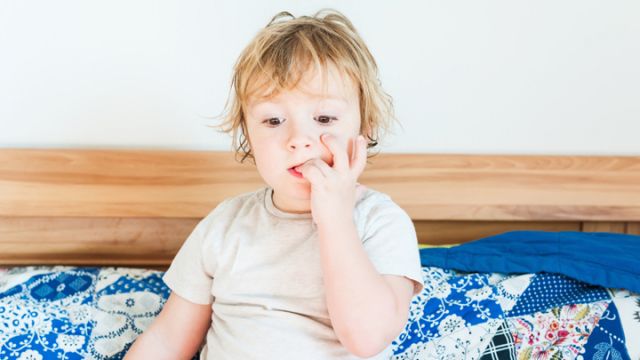 Childhood thumb-sucking and nail-biting has long been looked down on as unhygienic. Parents often discourage it, concerned it could expose their child to germs. Turns out, they’re right, but not in the way they think.

These childhood practices can indeed expose children to microbes, but that might be a good thing, according to a new study published by the American Academy of Pediatrics.The study found that children who suck their thumbs or bite their nails could be less likely to develop allergies like asthma and hay fever later in life.

The research was gleaned from a much larger project, the Dunedin Multidisciplinary Health and Development Study. The study has followed a group of people born in 1972 and 1973 in Dunedin, New Zealand. The latest results are based on tests done on these people as they’ve aged, with the latest data from 38-year-olds.

As children, the subjects’’ parents were asked about nail-biting and thumb-sucking behaviors at 5, 7, 9 and 11 years of age. Later in life, researchers compared which subjects developed asthma, hay fever or reacted to a skin-prick test to detect atopic sensitization. Atopy refers to a condition that can make individuals more likely to develop skin allergies like eczema, along with both hay fever and asthma.

After more than four decades, the results are in: the children that sucked their thumbs or bit their nails in the 70s are today less likely to be atopic. Moreover, children that both sucked their thumbs and bit their nails were even less likely to develop skin allergies. However, the research only found a clear link to skin allergies, not conditions like asthma and hay fever.

Nonetheless, researchers said the data adds to a growing body of evidence to support the controversial hygiene hypothesis. First developed in the late 1980s, the hypothesis suggests there could be a link between childhood exposure to microbes, and the development of allergies later in life.

Commenting on the study’s results to The New York Times, Associate Professor and co-author of the research Dr. Robert J. Hancox said, “The hygiene hypothesis is interesting because it suggests that lifestyle factors may be responsible for the rise in allergic diseases in recent decades.”

“Obviously hygiene has very many benefits, but perhaps this is a downside. The hygiene hypothesis is still unproven and controversial, but this is another piece of evidence that it could be true,” he explained.

However, Hancox noted the research remains incomplete.“Even if we assume that the protective effect is due to exposure to microbial organisms, we don’t know which organisms are beneficial or how they actually influence immune function in this way,” he said.

Of course, that’s not to suggest these childhood practices are totally harmless. Both thumb-sucking and nail-biting have been associated with some problems if they persist too long.

Nail-biting can sometimes cause infections in the fingers, and can pose a risk for infecting children with parasites, like pinworms. The habit has also been linked to teeth-grinding, which can be a serious dental problem later in life. In extreme cases, nail-biting can also cause fingers to become deformed.

Thumb-sucking can cause teeth problems in some children, meaning the habit is often discouraged by dentists. If the habit continues after children develop their permanent teeth around the ages of 6 to 8, it can cause the front upper teeth to grow into an open bite.

Nonetheless, most of the most serious issues related to both habits are relatively uncommon, and only prevalent in children that don’t naturally give up these habits after a few years. One doctor that spoke to The New York Times, pediatrician Lynn Davidson, said she prefers a “very low-key” approach to thumb-sucking. Davidson argued the habit tends to disappear over time. Most children stop sucking their thumbs between the ages of 2 and 4.

However, she noted one of the most interesting aspects of the new data wasn’t necessarily the result, but the method used.“My excitement is not so much that sucking your thumb is good as that it shows the power of a longitudinal study,” she said. Longitudinal studies are research projects that take place for decades on end, collating years of data.