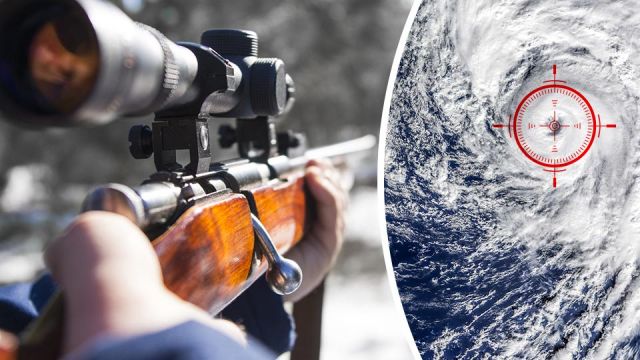 While it may seem like common sense advice like don’t place a steaming cup of hot coffee in your lap while you are driving, a Florida sheriff is warning people not to aim their guns and fire into Hurricane Irma!

In addition to wind and rain, there are a lot of emotions flying. Violent storms and catastrophic events such as Hurricane Irma cause tremendous stress.

We have a desperate need to control our environment, and when we realize we can’t control much in a massive storm such as Irma, things can get a little crazy.

Yes, you read that right. A Facebook event has drawn almost 50,000 people was initiated by Floridian Ryan Edwards. Edwards told BBC Newsbeat that he started the event out of stress and boredom. “It’s time we took a stand against this bully!” reads the event description.

Edwards said the response he got was overwhelming and unexpected. ” I never envisioned this event becoming some kind of crazy idea larger than myself. It has become something a little out of my control.”

Some of the comments on the Facebook page have been pretty wild. Someone even posted graphics on how to shoot a hurricane. According to one person, if you aim your rifle correctly the bullet might not come back and kill you.

The Tweet below from a sheriff in Pasco County Florida shows just how dangerous it is to shoot into a hurricane.

In response to the Facebook page started by Edwards, Pasco County Sherrif posted this Tweet warning people not to shoot into the storm:

To clarify, DO NOT shoot weapons @ #Irma. You won't make it turn around & it will have very dangerous side effectshttps://t.co/CV4Y9OJknv

The Tweet clearly shows why one does not want to fire into a hurricane. The bullets will return to you and could cause death.

Once crazy idea often sparks another crazy idea, especially when people are under stress. Since Edwards started his page, there has been a multitude of other pages springing up encouraging people to respond to Irma in a particular way. One page even encourages people to shoot flames at the Hurricane. “Join me in this fight as we shoot flames at Hurricane Irma and dissipate her on the spot.”

Others have decided to take on a more peaceful protest including “Push Hurricane Irma Somewhere Else” and “Peacefully Protesting Hurricane Irma.” Let’s show Hurricane Irma that her ideology of violence and destruction are not welcome in Gainesville,” the latter event’s description reads.

What should you be doing instead?

No amount of protesting, violent or peaceful, is going to stop the advance of this monster that has already destroyed thousands of homes and stolen at least 26 lives. Instead of shooting the hurricane or throwing flames at it, take the time to prepare and find a safe place to spend the duration of the storm with family and friends. Don’t go outside, even in the eye! This is a catastrophic storm and not something that we can stop with bullets or flames.

Respect her power and stay safe.