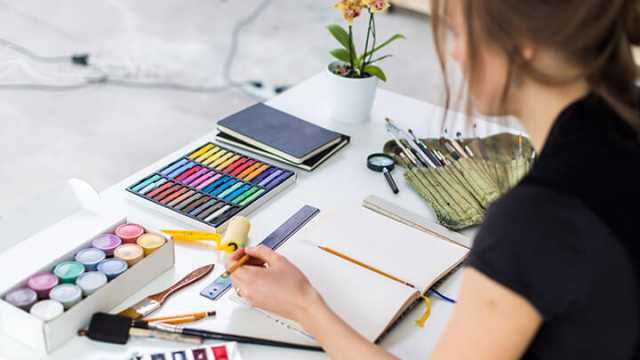 What makes some people more creative than others? Is it a natural trait that some people have, or can it be nurtured through practice? Is it a matter of using the right side of your brain (often referred to as the “creative side”), as has been often suggested? Creativity is a topic that scientists have been studying for some time, with some fascinating results.

One new piece of creativity research found that creative people seem to have more connections in their brains.

For their creativity study, researchers from Duke University and the University of Padova in Italy recruited a small group of college-age, healthy participants. The participants were given several tasks to perform to assess their creativity. These included drawing as many geometric objects as they could in five minutes, thinking of new ways to use common objects and answering questions in multiple ways.

The study participants were also asked to make a list of creative activities that they were involved in, including creative writing, visual art, music, dance and more. Once this data was collected, the participants were given MRI scans processed with diffusion tensor imaging, a technique able to analyze links between 68 regions of the brain. Through this technique, researchers were able to trace connections in the brain’s white matter.

While this study was small, it does show the brain processes behind creativity in a new light and paves the way for exciting new research. The research team behind this study has plans to study the relationship between brain connections and IQ. They also hope that their research may lead to early detection of neurological conditions such as Alzheimer’s disease.

The benefits of getting in touch with your creativity

While some people may naturally be more creative than others, creativity is still something that can be nurtured and explored. It’s highly worth it to do so, for many reasons.

Upon analyzing the results, researchers found that the participants had higher feelings of enthusiasm and positive growth on the days after they did something creative. According to Dr. Tamlin Conner, the leader of the study, and her colleagues:

“This finding suggests a particular kind of upward spiral for wellbeing and creativity — engaging in creative behavior leads to increases in wellbeing the next day, and this increased wellbeing is likely to facilitate creative activity on the same day… overall, these findings support the emerging emphasis on everyday creativity as a means of cultivating positive psychological functioning.”

Creativity in the workplace may enhance customer experience

Another bit of interesting research performed in 2016 shows that creativity in the workplace may enhance the customer experience and the experience of employees. The study was performed at the University of East Anglia. Researchers found that workplaces which were rated as creative by their managers also got higher ratings from customers. Employees at these workplaces also felt more like their needs were being met. They also experienced greater job satisfaction.

“We are living in a constantly changing environment and companies need to adapt to changes in technology and customer needs. Customers want a more personal service and we show that a more creative approach is a way to enhance their experience. Delighting the customer will increasingly stem from frontline employees’ creative rather than scripted role performance.”

On top of that, being creative is fun! Engaging in a creative activity — be it writing, painting, dancing or inventing recipes — truly is one of the great spices of life. If you’re not taking the time to delve into creative endeavors, you’re missing out!

Ways to get your creative juices flowing

There are so many ways to boost your creativity that it’s impossible to list them all. You’re only limited by your imagination! If you’ve been in a slump lately and want to get creative, the following are a few of the many ways you can begin.

What other ways do you get yourself in a creative mindset? Please share!