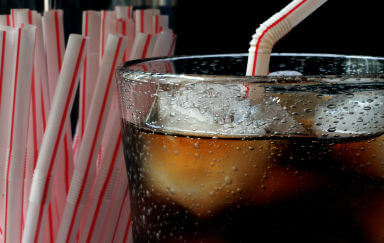 “Diet soda is one of the biggest health scams preying on well-meaning dieters looking for a sweet calorie-free beverage.” Dr. Joseph Mercola

The average American downs two cans of soda a day. In fact, soda is the biggest source of calories for Americans. But, you say that you drink diet soda with no calories or sugar, and claim it is the perfect alternative? Sorry to bust your bubble, diet soda is perfect only like the perfect storm! In fact, diet soda has gotten more research and media coverage in the past year than its refined sugar-laden cousin!

The most common artificial sweetener in soda and diet drinks is aspartame. Introduced in the 1970s as a “safe” alternative to sugar and saccharin, aspartame has been linked to numerous health problems. Recent studies have linked the chemical to neurological degeneration, seizures, chronic fatigue, cancer and death. Aspartame is also known to cause severe allergic reactions in people sensitive to it. Aspartame has also been linked to type 2 diabetes and obesity onset.

Although aspartame has been touted as a safe and even healthy alternative to drinks made from sugar, extensive research has shown it to be an unsafe additive for foods and beverages. However, the Food and Drug Administration continues to grant food makers approval to use the chemical as an artificial sweetener.

Here are just a few reasons why we at The Alternative Daily take a united stand against diet soda and say that it just “Bleapin” sucks.

In an eleven year-long study conducted by the Harvard Medical School, researchers found that women who drank diet soda were twice as likely to have kidney problems as those who did not drink diet soda. Researchers feel that diet sweeteners are to blame for the kidney issues.

In animal studies, the rats that consumed artificial sweeteners ate more and experienced a slowdown in their metabolism. They gained 14 percent more body fat in two weeks even when they ate fewer calories than the control group.

Metabolic syndrome is defined as a group of symptoms that together increase the risk of diabetes, stroke and heart disease. Symptoms include elevated blood pressure, low good cholesterol, high fasting glucose, abdominal obesity and high triglycerides.

People who typically drink two or more diet sodas have a larger waist-size than those that don’t, which may seem odd since diet sodas are supposed to be the zero (or low) calorie alternative. Another reason why just watching calories is not always the best thing to do.

Aspartame and other artificial sweeteners have been shown to increase appetite as well as contribute to toxic buildup within the body, causing our bodies to store additional fat. Artificial sweeteners trick the metabolism into thinking that sugar is coming, and this causes the body to create more insulin which results in increased abdominal fat. A study published by the American Diabetes Association indicated that as little as one soda a day significantly increased the risk of metabolic syndrome.

According to Purdue University researchers, “consumption of sugar-sweetened beverages has been increasingly associated with negative health outcomes such as being overweight, obesity, type 2 diabetes and metabolic syndrome.”

A 2011 study done at the University of Miami Miller School of Medicine found that daily consumption of diet soda increased the risk of heart attack and stroke by over 60%.

A recent study from the Temple University School of Dentistry revealed that soda consumption rots the teeth due to its acidity. They also compared the decay to the effects of methamphetamine. The researchers found that diet soda can be just as damaging to teeth as a hard drug addiction.

The study’s leading professor noted that if you, “look at it side-to-side with ‘meth mouth’ or ‘coke mouth,’ it is startling to see that the intensity and extent of damage are more or less the same.”

It was determined that there was no difference in the effect on the teeth between sugar-free and regular soda, as it is the constant exposure to the citric and phosphoric acids in soda that causes dental erosion. Drugs erode the teeth as they tend to cause dry mouth, which raises acidity levels.

Phenylalanine is an amino acid naturally found in many proteins such as meat, milk and eggs. It is also present in bananas. However, this natural amino acid is found in an isolated, processed form in aspartame, the artificial sweetener used in NutraSweet, Equal and some diet sodas, as well as a number of other products. Fifty percent of aspartame is composed of phenylalanine.

Conditions such as ADD, ADHD, and behavioral and emotional disorders have been linked to high levels of phenylalanine in the body and brain.

Other Problems with Phenylalanine

For those individuals who have PKU, phenylalanine can be deadly. It has been found to cause seizures, brain damage and even death in the one in ten thousand people who carry the PKU gene.

Many people are unaware that they carry this gene if they have never had a blood test for it. Foods, supplements and medications that contain aspartame are required to carry a label stating, “Phenylketonurics: contains Phenylalanine,” to protect these individuals, however, those who do not know they carry the gene may unknowingly put themselves in serious danger by consuming products containing aspartame.

Diet sodas contain preservatives that are not found in regular sugar-laden sodas. They go by the names sodium benzoate or potassium benzoate. “These chemicals have the ability to cause severe damage to DNA in the mitochondria to the point that they totally inactivate it–they knock it out altogether,” says Peter Piper, a professor of molecular biology and biotechnology at the University of Sheffield in the U.K. Both sodium and potassium benzoate are classified by the Food Commission in the United Kingdom as mild irritants to the skin, mucous membranes and eyes.

Sucralose, sold under the name Splenda, has been implicated in a number of serious health reactions including gastrointestinal problems, allergic reactions, blurred vision, seizures, weight gain and an increase in blood sugar. Very few trials were ever done on this synthetic sugar and those that were done looked at tooth decay, not human tolerance.

Splenda, recommended to diabetics since its FDA approval in 2006, is highly popular. In fact, Splenda sponsors both the American as well as British Diabetes Associations. The “yellow packet,” as it is endearingly referred to, was promised to be a safe and effective replacement for sugar for those with insulin resistance issues.

However, according to a study published in the journal Diabetes Care, this extremely popular, yet dangerous, sweetener confuses the body and changes the way it handles sugar. This is devastating news to all those who have put their trust in not only the FDA but also in the manufacturers of Splenda.

According to Dr. Mercola, it is possible to become addicted to diet soda. This, he feels, is due to the inability of the brain to tell the difference between real and artificial sugar. Are you still drinking diet soda? If so, are you addicted?

STOP drinking diet soda and all artificially sweetened drinks today. The best option to avoid the sweet trap is to not start in the first place. The problem is, sweeteners are a staple in the American diet. Given a choice, drink plain water instead of soda. You can add a slice of lemon, lime or orange to brighten up the flavor. Other healthier alternatives to soda include seltzer water and fresh juice (and we are talking fresh squeezed here, not the store bought varieties). We suggest pure filtered water or one of our tasty soda alternatives.