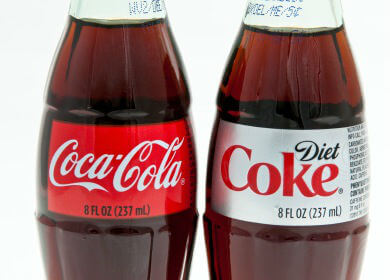 Coca-Cola made its debut in 1886 in Jacobs Pharmacy in Atlanta. This cocaine and caffeine induced sugary soda was created by pharmacist John Pemberton, who decided to leave his drug making behind with hopes of finding success in the beverage industry.

Not a marketing whiz himself, Pemberton was able to convince Frank Robinson to be his partner and Robinson designed the logo for Coke as well as the name Coca-Cola.

Together they put their cola formula on the market, but sales were rather bleak the first year, which was devastating to Pemberton, who died in August of 1888, before ever seeing any success with his beverage invention.

It was not long, after the passing of Pemberton, that Asa Griggs Candler rescued the Coke business and really started to market the soda. The Coke name was becoming more and more popular all over the country. Within months after forming the Coca Cola Company, Candler, Robinson and 3 other partners began really pushing the product. By 1914, the number of Coke manufacturing plants rose from 2 to 1,000. Coke was now being shipped all over the world.

The marketing genius of Coke still exists today, and we see fancy ad campaigns, endorsements and the Coke name plastered everywhere. Everyone knows about Coke whether they drink it or not. The latest Coke advertising campaign is a bit of departure from their usual feel good, taste great angle.

Coke has poured all of their creative effort into advertising that supports the use of aspartame, the artificial sweetener which they use to sweeten their Diet Coke product. They are even going so far as to say that not only is aspartame safe but it can also help you lose weight and reduce stress in your life.

Coke representatives say that they have strong evidence to support their bold health claims. These claims are reminiscent of early claims that Pemberton made when he said that his Coke would relieve headaches and reduce fatigue. However, due to the early Coke recipe, which contained trace amounts of cocaine, Pemberton was probably more accurate in making his health claims than the company is with these new claims.

Coke has been dragged over the coals recently by critics and health experts who blame the present day obesity epidemic on the high sugar content of soda, especially Coca-Cola. With decreasing sales, Coke was motivated to come up with some sort of creative way to convince Coke lovers all over that their diet soda is not only an effective weight management tool, but completely safe.

All of this despite mounting evidence that seems to single out aspartame as a dangerous substance that should be avoided at all times. But who is right ? Either aspartame is safe or it is not.

How Can This be Safe?

The Food and Drug Administration called aspartame (NutraSweet) safe in 1974 after it assessed data submitted by G.D. Searle Co, the maker of the chemical cocktail. When a psychiatrist found that aspartic acid, a key ingredient in aspartame, created holes in the brains of mice, an investigation into Searle’s claims began.

Corrupted studies and falsified claims were revealed during the investigation. The FDA agreed to further investigate Searle by grand jury, but US Attorney Thomas Sullivan and Assistant US Attorney William Conlon did not follow up. Conlon found a job at the law firm representing Searle. Hmmm….kind of suspicious don’t you think?

What are the Real Dangers?

Well cited independent research shows that phenylalanine, the main ingredient in aspartame, is a powerful neurotoxin, especially for those who suffer from the genetic disorder phenylketonuria (PKU). Phenylalanine is an amino acid that is found in a number of proteins and also in bananas. Dr. Janet Starr Hull, author of the book “Sweet Poison”, states that amino acids should always be eaten in the way they are presented in nature, not extracted and processed.

When amino acids are isolated they become dangerous to health, and too much of this amino acid can cause overstimulation of neurons and cellular death in the brain. Conditions such as ADD and ADHD, as well as behavioral and emotional disorders have been linked to high levels of phenylalanine in the brain.

The claim that aspartame can help you control your weight is nothing short of a joke; however, many people are under the false impression that somehow diet sodas are better for health than regular sugar-sweetened sodas. The diet beverage market has increased substantially over the past 25 years because of people who are convinced it is harmless.

Susie Smithers, a behavioral neuroscientist at Purdue University, states that people who drink soda made with artificial sweeteners including aspartame, sucralose and saccharin, are twice as likely to develop what is known as “metabolic syndrome” compared to those who do not drink the soda.

Metabolic syndrome is a precursor to diabetes, stroke and heart disease. When we consume chemical sweeteners, our body becomes confused and actually craves sugar which can lead to overindulgence. This does not sound like a prescription for weight loss!

According to the FDA, who claims that aspartame is safe, over 85% of all complaints received are related to aspartame. Let’s take a look at what the Aspartame Consumer Safety Network Fact Sheet has to say about the cumulative side-effects that have been reported: 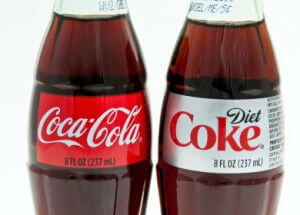 Lisa Lefferts, senior scientist for the Center for Science in the Public Interest, does not recommend the use of aspartame as a sweetener in diet drinks.

“Three independent studies have found that aspartame causes cancer. These studies, in our view, are superior to earlier, industry-sponsored studies that found it did not cause cancer, because they used a larger pool of subjects and a more sensitive protocol.”

Additionally, diet soda has been linked to kidney problems. An eleven year study at Harvard Medical School concluded that the risk of kidney function decline was attributable to consuming just 2 diet sodas per day. Aspartame is now genetically modified, making things really scary, and has been implicated once again with brain holes and issues with reproduction.

But….. Coke says it is safe, and after all, It’s The Real Thing, right?