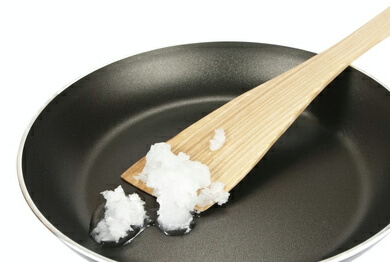 What is America’s affinity with cooking sprays? They do indeed help keep foods from sticking to the pan, but on the flip side, their very contents are also used in soap scum removal products.

Did you know that if your bike chain is rusty, a little cooking spray will get it moving again, or that cooking spray is great for getting bugs off of your windshield?

Perhaps it is time to rethink that aerosol can in your cupboard and consider switching to a healthier way to get the same job done. Those of you that use an organic cooking spray need to be careful as well – these are not so good for your health either. Here are our top five reasons why you should think about making a change.

Ingredients such as mono and diglycerides, soy lecithin, dimethyl polysiloxane, dimethyl silicone and artificial flavors are commonly found in cooking sprays. The long term effects of these additives have not been studied, and it is unclear the impact they have on human health – although it is clear that it can’t be good.

The American Academy of Environmental Medicine has conducted animal studies that have shown serious health risks such as auto-immune conditions, diabetes and alterations in major organs such as the gastrointestinal system because of genetically altered organisms. In addition, genetically modified crops use a high level of pesticides, which increases our exposure to toxic chemicals.

Cooking Sprays Can Damage Your Lungs

Even tiny amounts of cooking sprays, when heated, release very high concentrations of diacetyl. This chemical can cause serious – even fatal – respiratory disease when exposure is repeated or long term. Some cooking spray manufacturers no longer use this chemical, but researchers are still concerned that the inhalation of particles and vapors mixed with artificial ingredients may harm lung health.

Although many people think that soy is healthy, it is not, and actually appears in numerous processed foods, in every form imaginable. The soy is most likely genetically modified, and over-consumption can lead to serious health complications.

One study at Harvard University found that eating half a serving of soy each day caused male rat fertility problems and increased breast cancer in female rats. Health experts also caution against over-consumption of soy and soy allergies, which have been on the rise since 1998

Other experts propose that the soy-laden diet of today may also be a contributing factor in the increased incidence of soy allergies, which have increased by 50 percent since 1998, according to Nexus Magazine.

Cooking sprays contain nitrous oxide, which is a greenhouse gas and what Science Daily calls, “the largest ozone depleting substance emitted through human activity.” This chemical does not break down, and stays in the environment for decades. There is also a tremendous amount of waste created by packaging.

If every household in the United States used just one can of cooking spray each year, it would add up to 115 million cans in landfills annually. Now, some people recycle these cans; however, it does take a tremendous amount of energy in heat and electricity to do this.

Try a healthier way to grease your pots by using organic coconut oil. You can even sprinkle a little flour over the top of the oil if you need to.