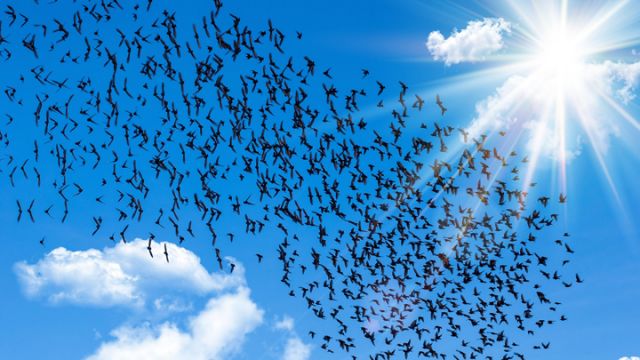 Odds are you have starlings in your neighborhood. If you find a baby starling on the ground, you can call a local wildlife rehabilitation organization, but they may not help you. That’s because starlings are an invasive species, and government agencies from the local to federal level don’t want them around.

It is illegal to keep native North American birds as pets, but that’s not the case with European starlings. In fact, if you come upon a baby or injured starling, you are not allowed to release it once the bird is nursed back to health because of their invasive status. Depending on the state, you might require a permit to keep your pet. Keep in mind that a pet starling can live for 20 years or more.

European starlings aren’t much to look at, but they’re very smart. These medium-sized black birds boast speckles on their feathers. Males and females appear virtually identical.

European starlings arrived on these shores in 1890. They all descend from 100 birds released in New York City’s Central Park by members of the American Acclimatization Society. This organization wanted every bird mentioned in Shakespeare’s plays to live in North America, and the Bard mentions starlings in “Henry VI, Part 1.” The birds quickly multiplied, and today the descendants of those original 100 starlings number 200 million and live throughout the continent.

Male starlings aggressively claim nesting sites from other species, and have been blamed for lowering the numbers of Eastern bluebirds, purple martins and other native birds. Male starlings will fight to the death over a nest, and will also dump eggs and kill another bird’s young. Starlings do build their own nests, but they’re famous for shoddy construction. That’s one reason so many baby starlings are found on the ground.

If you enjoy feeding wild birds, you probably don’t like starlings. They repeat their aggressive behavior at bird feeders, driving out native, more colorful and gentler species.

A starling flock can easily destroy a farmer’s entire fruit or vegetable crop. Flocks might contain 100,000 birds or more. Annually, agricultural loss to starlings totals at least $800 million. The U.S. Department of Agriculture recommends several avicides – bird poisons – to get rid of starlings around farms and ranches.

Other than hawks and other birds of prey, adult starlings have few predators. Starlings are exempt from the federal Migratory Bird Act, so it’s permissible to humanely destroy them at any time, with no permit necessary.

Starlings easily mimic the calls of other birds, but they also pick up human speech. In addition to talking, they’ll imitate sounds, so your pet starling might repeat your phone ringtone or noises from your favorite video games.

If you find a young starling, feed him pieces of soaked dog kibble several time daily – he’ll let you know when he’s hungry. Quality kibble contains the protein a wild bird would normally receive from bugs and worms. For a special treat, catch some flies and feed them to your starling. Mature starlings can continue eating wetted kibble, along with pieces of cooked meat, fruit and vegetables.

If you want to feed them a commercial bird food, your best bet is feed designed for laying hens.  Starlings need variety in their diets, and are primarily carnivorous. Foods designed for other types of pet birds aren’t sufficient for starlings, as most birds kept as domestic birds are omnivorous and don’t contain sufficient protein. Birds should always have fresh, clean water available.

Keep a starling in as large a cage as possible. Large parrot cages fill the bill, but an indoor aviary is even better. Keep starlings in an area with lots of human activity. They bond to their people and enjoy being part of the household. Let them out daily in a closed room so they can safely fly around and get exercise. They generally return to their cages when they’ve had enough. Give your bird toys to play with, and put mirrors in the cage. Starlings love shiny objects.

Most wild animals do not readily adjust to life as pets. Starlings are a great exception. Because they are invasive and dangerous to other birds, a life as a treasured pet works out well for them.