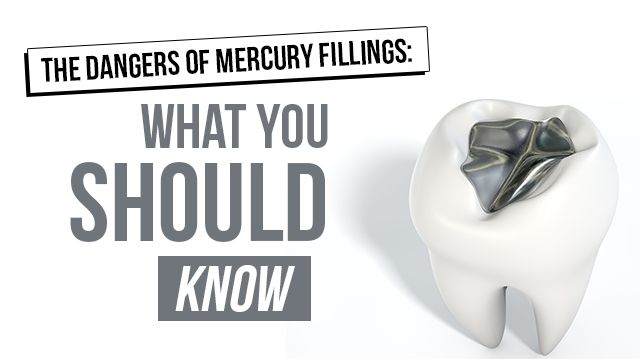 Have you ever experienced a shooting pain in your mouth, only to find out that you’ve developed a hole in your tooth? Generally, a buildup of plaque begins to “eat” away at a tooth, causing a cavity. Once your tooth begins to decay, your dentist needs to clean out and fill the affected area. This prevents the cavity from getting bigger and eventually exposing a nerve. Luckily, a filling will do the trick, helping to restore a tooth after damage has occurred. Although this is beneficial, the materials used to fill your tooth could potentially affect more than your oral health.

Fillings can be a great way to address tooth decay. However, the use of mercury in fillings is controversial. The dangers associated with mercury are well known, so how is it that so many people are walking around with mercury fillings? Are you at risk?

“Mercury Undercover” exposes the cause and effect of the well-hidden evidence of mercury contamination as seen through the eyes of doctors, scientists, environmental experts and mercury-poisoned survivors.

The dangers of mercury fillings — fact or fiction?

Amalgam or silver fillings have been used for over 150 years and are still being used today based on their low cost and high durability. This would be great if it weren’t for one key issue: the concern of mercury toxicity. Made from an alloy of silver, tin, copper and zinc, combined with 50 percent mercury, the use of amalgam fillings has sparked plenty of debate.

As stated by the Food and Drug Administration (FDA), mercury vapor from fillings is carried by the blood, killing cells and damaging the blood brain barrier. In turn, it is believed that mercury levels accumulate in the brain, damaging both nerve and brain cells. That doesn’t sound very safe, does it?

Based on autopsy studies, it has been reported that chronic exposure to amalgam fillings causes mercury to bioaccumulate not only in the brain, but also in the kidneys, liver and heart. One study, published in The American Journal of Forensic Medicine and Pathology, stated that amalgam fillings account for approximately two-thirds of the human body’s burden of mercury.

While studying cadavers, researchers found that individuals with more than 12 amalgam fillings had mercury levels that were up to 10 times higher in the brain, thyroid and kidneys than those who had less than three fillings. Cadavers with more than 12 fillings also had significantly higher mercury levels in the brain in comparison to other tissue.

This has led to concerns regarding the development of neurological disorders such as Alzheimer’s and Parkinson’s disease. One recent study, published in Alzheimer’s Research and Therapy, found that women who were exposed to amalgam fillings were slightly more likely to develop Alzheimer’s disease, in comparison to their non-exposed counterparts.

The removal of amalgam fillings

Overall, it’s been reported that the level of mercury in the body is two to 12 times higher in the body tissues of individuals with dental amalgam fillings. Can this be corrected? Can the removal of amalgam fillings reduce the likelihood of developing these health issues?

In a recent study published in the Journal of Oral Rehabilitation, researchers were interested in whether the removal of all amalgam fillings would result in long-term changes to oral health, as well as the overall health of participants. Within the treatment group, all fillings were removed and replaced with alternative materials; the control group did not receive any intervention.

While no improvement in health complaints was found in the control group, the treatment group experienced reductions in both intraoral and general health complaints. This study supported previous data showing that once the mercury fillings were removed, mercury levels decreased in the participant’s urine and serum.

The researchers concluded that although the mechanisms behind these results remain to be discovered, it’s clear that the replacement of amalgam fillings resulted in the reduction of health complaints. Although potential contributing factors need to be examined, they believe that reduced exposure, patient-centered treatment, and the elimination of worry may have all played a role.

At this point, you may be thinking, I have amalgam fillings — what do I do about it now? It’s comforting to know that these fillings can be removed. However, it’s typically very costly and can actually be dangerous. The removal of amalgam fillings has the potential to release more mercury vapor directly into your body.

If you would like amalgam fillings removed, it’s imperative that you meet with a dentist who has been specifically trained to perform this procedure. It’s recommended that you seek the assistance of a biological dentist, who will focus on a more holistic approach. During safe removal a dentist should:

It’s also recommended that you prepare your health prior to this surgery, ensuring that your detoxification mechanisms are functioning at an optimal level. To prevent tooth decay in the future, it’s crucial that you focus on good oral hygiene, while consuming plenty of whole foods that naturally fight bacteria in your mouth.