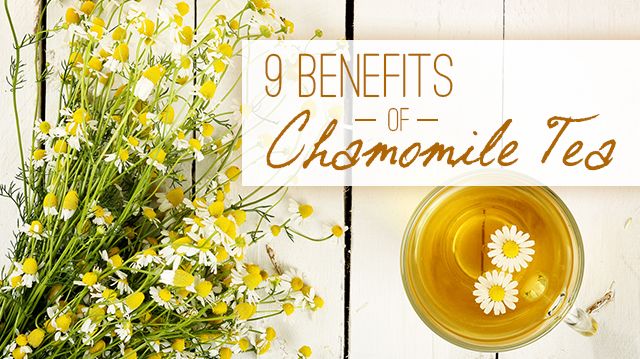 You often hear about the benefits of tea; however, not all teas are equal in terms of their beneficial effects. Green tea is well known and is, of course, rich in antioxidants, yet it’s not the only beneficial option. Known as one of the most ancient medicinal herbs, chamomile is packed with flavonoids and terpenoids, targeting a wide range of health ailments.

Consume this potent tea on a daily basis in order to benefit from the following nine health effects.

For those of you who take NSAIDs, or non-steroidal anti-inflammatory drugs, chamomile tea may offer similar benefits. Numerous studies have identified this herbal tea’s ability to decrease inflammation, preventing associated conditions. It has also been known to reduce swelling caused by inflammation due to allergies.

Within one 2011 study, chamomile was studied based on its ability to heal ulcers in rats. Inflicted with a small five millimeter wound on their tongues, rats in the experimental group were treated with a chamomile ointment, whereas the control group wasn’t treated at all. It was found that chamomile had a positive influence on collagen production and the regrowth of tissue, while decreasing overall inflammation.

Migraine headaches can be so overwhelming that you can’t do anything by lie in a dark room. If you can relate, you know how painful they can be. Although no complete treatment has been developed yet, chamomile has been studied as potential alternative remedy. Based on its flavonoid and chamazulene content, chamomile is believed to target pain while inhibiting pro-inflammatory biomarkers.

For centuries, individuals feeling ill have consumed chamomile tea in order to target common colds and other ailments caused by decreased immune function. Researchers have found that drinking chamomile tea is followed by a significant increase in urinary hippurate, which is a breakdown product of plant-based compounds called phenolics. Phenolics have been linked to antibacterial activity — boosting immune function so that your body can naturally fight infections.

Although an upset stomach may be triggered by a number of conditions or contributing factors, poor digestion often plays a role. Chamomile tea has the ability to relax and soothe the muscle lining within your digestive tract, blocking chemicals that can cause spasms. Throughout literature, chamomile has been used to treat digestive conditions, upset stomachs, ulcers, gastrointestinal irritation and flatulence.

Traditionally, chamomile tea and chamomile essential oil have been used to treat insomnia because of its calming effects. It’s believed that this herb can be used as a mild tranquilizer, inducing sleep, based on the flavonoid apigenin. This compound binds to benzodiazepine receptors in the brain, yielding hypnotic and sedative effects.

Ladies, you know that menstrual cramps can leave you crouched over in pain as you try to massage out the “knots” of being a woman. While drinking chamomile tea, urinary levels of glycine increase. This amino acid is believed to target muscle spasms. In turn, it’s believed to relax the uterus, reducing those crippling cramps.

Hay fever is a common allergy that is caused by dust or pollen, causing inflamed, itchy eyes and a runny nose. Research shows that chamomile extract offers powerful anti-allergenic effects. It’s believed to inhibit the release of histamine, which is what causes problematic symptoms. A 2011 study reported that effects were dose dependent, with higher doses yielding a stronger effect.

Anxiety, panic attacks and even depression have been successfully treated with a remedy of chamomile tea. Chamomile yields two key chemicals, luteolin and apigenin, so one to three cups of chamomile tea daily may promote relaxation, reducing symptoms of anxiety.

One double-blind study, published in the Journal of Clinical Psychopharmacology, found that chamomile extract offered anxiolytic effects in patients with mild to moderate general anxiety disorder. In fact, after eight weeks, symptoms of anxiety were reduced by 50 percent.

From scrapes and infected wounds to burns, chamomile is known to accelerate healing while targeting infections. In order to treat wounds, create a salve using steeped chamomile flowers and coconut oil. Consuming chamomile tea on a daily basis will also help heal wounds from the inside out.

One key note to remember is that when brewing tea, some of the flower’s volatile oils can be lost through steam. This is why it’s recommended that you brew your tea within a covered container or pot. When brewing from chamomile flowers, you can also eat them after you’ve brewed your tea in order to reduce waste and benefit your health even further.