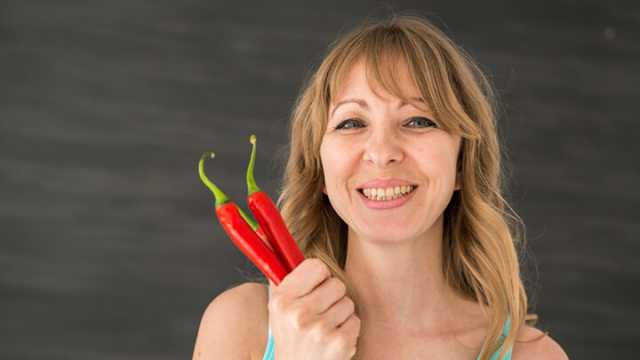 When it comes to hot peppers, some people like them, some people tend to avoid them and some absolutely cannot get enough of them. Maybe you are one of these people. Many hot pepper aficionados seek the spicy kick in nearly all of their meals. You can probably find at least a couple varieties of hot sauce in their kitchen and perhaps a few varieties of fresh chiles, as well. For these folks, the spicier, the better.

It turns out that spicy pepper lovers may really be onto something — they may even be lengthening their lifespans.

It’s true: eating spicy peppers such as jalapenos, habaneros and cayennes has been linked to reducing the risk of death from all causes in a large population-based study. The new study was performed by researchers at the University of Vermont and published in the journal PLoS One. The study associated eating hot peppers with a 13 percent lower risk of “total mortality.” This may have a lot to do with capsaicin. That’s the compound which gives spicy peppers their spice factor.

To arrive at their results, researchers used data collected for the National Health and Nutritional Examination Survey III. This survey followed over 16,000 Americans for a maximum of 23 years. The researchers took note of the prevalence of hot pepper in the individuals’ diets. They analyzed this against the number of deaths and causes of death in the study sample. Along with finding hot pepper consumption to be linked to a 13 percent lower death risk overall, researchers also found it to be protective against some cases of heart disease.

According to the study authors:

“Although the mechanism by which peppers could delay mortality is far from certain, Transient Receptor Potential (TRP) channels, which are primary receptors for pungent agents such as capsaicin (the principal component in chili peppers), may in part be responsible for the observed relationship.”

The researchers also hypothesize that capsaicin’s link to preventing obesity and improving the flow of blood through the heart may be involved in its longevity factor. They also state that capsaicin may have a positive effect on gut bacteria. This may also contribute to protection from disease.

The protective effects of capsaicin

It has long been known that capsaicin, and hot peppers in general, can have a wealth of beneficial, protective effects on the body. In a 2014 study published in the journal Nutrients, the study authors wrote:

“Chili peppers have a long history of use for flavoring, coloring, and preserving food, as well as for medical purposes. The increased use of chili peppers in food is very popular worldwide. Capsaicin is the major pungent bioactivator in chili peppers. The beneficial effects of capsaicin on cardiovascular function and metabolic regulation have been validated in experimental and population studies.”

The authors of this study concluded that, “The enjoyment of spicy flavors in food was associated with a lower prevalence of obesity, type 2 diabetes and cardiovascular diseases.”

Even more benefits of spicing it up…

So, if you’re a spicy food lover, good for you! Enjoy the kick and know you’re doing something great for your body. If you’re not the biggest fan of hot peppers, you can still add a little to recipes to get the benefits. A little bit of chopped jalapeno in a sauce or a dash of cayenne here and there won’t set your mouth on fire. But, it can still give you the capsaicin that has been found to be oh-so-healthy. Give it a try!