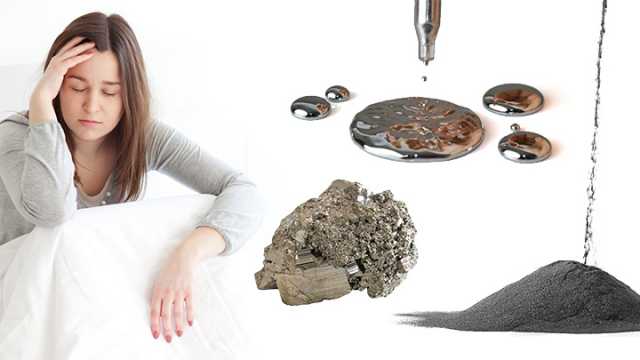 Are you a gluten-free dieter? Seafood aficionado? Fan of commercial deodorant? Chances are, you’ve got heavy metals in your system. Lead, arsenic, mercury and other metals are often found in processed food items and pesticides used to grow our food. And while you may be consuming these metals in trace amounts, over time they accumulate in our bodies and make us sick. Here’s what to watch out for and how to detox from heavy metals.

As heavy metals build up in our bodies, they can wreak havoc on multiple systems in the body. The problem is, the symptoms of heavy metal poisoning can be vague and difficult to diagnose. This condition is frequently misdiagnosed as autism, depression, chronic fatigue syndrome, the onset of menopause and more. Here are just a few of the most commonly reported side effects:

If this sounds like you, evaluate your lifestyle and dietary habits to see if you may be at risk for heavy metal poisoning. When you go to the doctor, check if some of the following metals are present in your blood and urine:

If you’ve heard of lead-poisoning, it’s likely in association with lead-based paint. Even though it was discontinued in the 1970s, unfortunately, lead poisoning is still a risk. This heavy metal is often found in our food supply, thanks to processing. A variety of processed foods, as well as canned goods, may contain traces of lead. It’s even been found in the water supply of several states, like elementary schools in Kansas.

Lead is extremely dangerous to consume, especially for young children. It can impair neurological development and lead to learning disabilities and behavioral issues. In adults, lead exposure is linked to dementia, kidney disease and issues with the cardiovascular, digestive, skeletal and reproductive systems. In both adults and children, lead may even cause seizures. Yikes! Not something you want to be putting in your body.

This metal naturally occurs in soil and groundwater. However, its inorganic form is also used in a number of manufacturing processes, from pesticides to rat poison to rice. A couple of years ago, the FDA released a statement saying that rice has higher levels of inorganic arsenic than other foods. This is because it’s often grown in foreign countries that water or fertilize with arsenic. But that’s not all. Arsenic has also been found in chicken and apple juice here in the states.

An excess of arsenic in your system can lead to digestive distress, muscle cramps, hair loss, bloody urine, cancers and even death. The World Health Organization (WHO) warns that, “Long-term exposure to arsenic from drinking-water and food can cause cancer and skin lesions. It has also been associated with developmental effects, cardiovascular disease, neurotoxicity and diabetes.”

The best-known food source of mercury is fish, especially larger species like swordfish and tuna. However, Mercury also enters soil and water through waste runoff from agricultural operations, landfills and manufacturing plants. If soil gets contaminated with mercury, it’s present in our crops as they grow. Mercury is a particularly nasty metal because it can cross the blood-brain barrier. If this happens, it can lead to immune system impairment and neurological malfunction.

Symptoms of mercury poisoning include blurred vision, discolored skin, weakness, neuropathy and heart arrhythmias. The WHO explains, “Mercury is toxic to human health, posing a particular threat to the development of the child in utero and early in life. Mercury exists in various forms: elemental (or metallic), inorganic (e.g. mercuric chloride) and organic (e.g., methyl- and ethylmercury), which all have different toxic effects, including on the nervous, digestive and immune systems, and on lungs, kidneys, skin and eyes.”

While not quite a heavy metal, it’s worth mentioning aluminum since it’s commonly found in our food and beauty products. This metal is routinely used in canning, cookware and processed food operations. Researchers have found trace amounts of aluminum in processed foods, baked goods, baby formula, some baking powders and commercial deodorant — the latter of which is linked to breast cancer.

Symptoms of aluminum poisoning include muscle pain, ulcers, pain in the spleen, appetite loss and convulsions. If aluminum exposure is chronic, it may even lead to Alzheimer’s and Parkinson’s disease. Aluminum poisoning can be especially dangerous if you are deficient in magnesium, so stay away from processed goods!

How to do a heavy metal detox

With all of the risks in heavy metal accumulation, it is important to routinely flush and detox your system, called “chelation.” We recommend this doctor-guided 14-day detoxification program. Also, follow these tips:

1. Filter your water (and drink more of it)

Water naturally detoxifies the body by delivering waste to the kidneys and helping you sweat more efficiently. However, make sure your water is coming from a clean source. Only drink purified water and use refillable BPA-free bottles to hydrate. Try this recipe first thing in the morning to hydrate and set your digestive system on the right track.

Make sure to drink this elixir at room temperature, which can boost your metabolism and improve your ability to absorb nutrients. In addition to flushing out heavy metals, getting enough water during the day will Increase energy, clear congestion, boost weight loss, alleviate constipation and improve brain function by 14 percent.

No system is perfect, unless ofcourse you grow your own food in organic fertilizer with purified water in uncontaminated soil. But really, who has time for that? Many of us simply can’t. And if that’s the case, eating organic food is the cleanest option out there. With organic fruits and vegetables, you’re avoiding GMOs, which often contain pesticides, dangerous chemicals and, yes, heavy metals. Your biggest risk with organic food is that the water or soil was contaminated, but at least you can be sure it wasn’t soaked in pesticides. To get your produce even cleaner, check your farmer’s markets and ask how sellers grow their own food.

Cilantro is a winner when it comes to removing heavy metals from the body, like lead, aluminum, and mercury. A study published in the Journal of Nutritional and Environmental Science found that cilantro removes mercury from the central nervous system. In another study, scientists found that cilantro decreased lead absorption in animals. If you can, use fresh cilantro leaves or coriander oil every day to purge heavy metals from your body. For an extra boost, add garlic to your dishes — it’s a known detoxifier well-worth the stinky breath.

In addition to making you look and feel great, exercise supports the digestive system, one of the body’s natural processes for detoxing. All that moving around will also keep blood circulating throughout the body, which keeps heavy metals from accumulating. To step it up a notch, sauna therapy is another great way to eliminate toxins. A 2012 study in the Journal of Environmental Health showed that sweating in a sauna can help individuals eliminate dangerous heavy metals, including lead, arsenic, cadmium and mercury.

Aside from their rich antioxidant content, fruits and vegetables are loaded with pectins, a soluble fiber which help to naturally detoxify the body. A study published in Alternate Therapies in Health and Medicine found that pectin increased the amount of lead flushed out through the urine by up to 132 percent. To get yours, go for pears, apples, citrus fruits, cabbage, grapes, beets and carrots. Grapefruits, in particular, are high in naringenin. This flavonoid helps the liver burn fat that would otherwise accumulate toxins, giving your detox an extra boost.

Milk thistle has been around for hundreds of years, yet it is still relatively undiscovered in the states. This herb is a powerful detoxifier, and deserves a place in your kitchen during a heavy metals detox. In a study published in The Journal of Biological Research, researchers attempted to treat animals with mercury poisoning using garlic and milk thistle seeds. They found that milk thistle seeds protected the liver from some of the more damaging effects of mercury. To destroy toxins, take milk thistle seeds, brew an herbal tea or try an all-natural tincture to support healthy liver function.