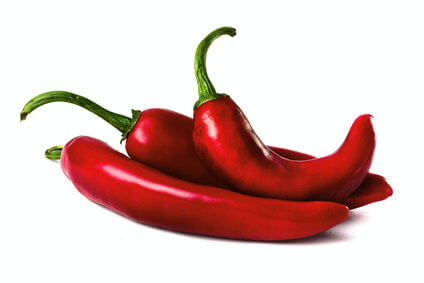 Anyone who has ever popped a habanero pepper into their mouth knows that the experience is one that certainly tests pain tolerance. While the initial burning mouth and watery eyes are unpleasant for many – although some truly enjoy it – spicy peppers may actually help relieve other types of pain, and are also used by some as an aphrodisiac.

The compound that makes peppers such as jalapeno peppers, serrano peppers, cayenne peppers and habanero peppers spicy is capsaicin. The amount of capsaicin that is found in a particular pepper is measured in Scoville heat units.

The average jalapeno is rated approximately 5,000 units, while the Trinidad Moruga Scorpion, named the hottest pepper in the world by the New Mexico State University Chile Pepper Institute, is rated at a whopping 1.2 million units. The habanero pepper, one of the hottest peppers normally used in cooking, is rated between 150,000 and 350,000 Scoville units.

The association between capsaicin and both pain reduction and pleasure enhancement has to do with the endorphin rush that the compound triggers in the body. The body naturally releases endorphins in response to pain or stress, and these chemicals work to reduce the feeling of pain, as well as to provide a temporary sense of elation, or ‘high.’

According to Paul Bosland, director and co-founder of New Mexico State University’s Chile Pepper Institute, “the endorphins work to block the heat. The body produces them in response to the heat, which it senses as pain.” The University points out that capsaicin may decrease itching and inflammation associated with psoriasis.

Dr. Ashwin Mehta, director of integrative medicine at the University of Miami Miller School of Medicine, adds, “it’s used for all kinds of arthritis pain, as well as for neuropathic pain and dermatologic conditions that have a painful itch.”

As far as capsaicin’s connection to pleasure enhancement, along with the endorphin rush, capsaicin has been found to increase blood flow throughout the body. These effects combined may work to assist some people in the bedroom, and chili peppers have traditionally been used for generations for this purpose.

Capsaicin also speeds up the metabolism, and the hot peppers it is found in contain flavonoids and carotenoids, which can help rid the body of cancer-promoting free radicals. Bosland states that there is a connection between people who regularly consume chili peppers and lower instances of prostate cancer.

Because many types of hot peppers can be too hot for many people to handle, add them into your diet with caution, starting with less-intense peppers, such as jalapenos, and work your way up if desired.

Some people choose to supplement their diets with pure capsaicin extract, however, as it is rated over 15 million Scoville units, talk to a natural health professional about proper ways to use it, and make sure that it is safe for your individual health.