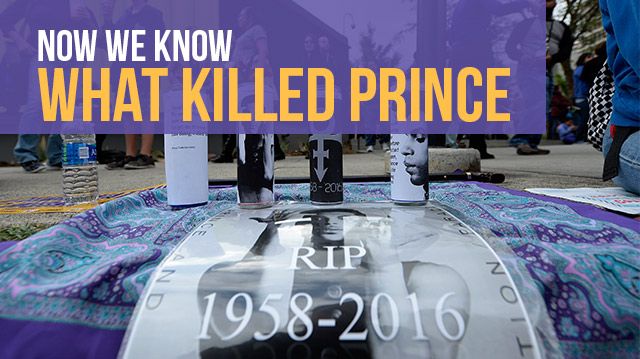 After weeks of speculation about the sudden death of music legend Prince, reports reveal he died  from an accidental overdose of a self-administered opioid painkiller. But authorities have yet to determine how he got his hands on the highly addictive drug fentanyl.

His struggle with debilitating pain

Prince was found unresponsive in an elevator at his Paisley Park Studios on the morning of April 21, 2016. It appears he struggled with unbearable  hip pain throughout his career, according to The New York Times. Authorities now say he died from self-administering the pain drug fentanyl.

Although the music icon was said to have had a reputation for clean living, it seems that he developed a dependency on medication to treat his pain. What’s not clear, though, is how he obtained the fentanyl and whether it had been prescribed by a doctor.

What exactly is fentanyl?

Fentanyl, a strong opioid painkiller, is prescribed to treat severe pain. Like heroin and morphine, it works by binding to tiny opioid receptors in the brain and spinal cord , which leads to a decrease in the way a person feels pain and reacts to pain. Fentanyl is a highly addictive opiate and 50 times more potent than heroin.

It’s used to treat severe pain associated with surgeries. In addition to being a painkiller, fentanyl acts as a tranquilizer. Fentanyl abuse is thought to be partly responsible for a recent surge in overdose deaths in some parts of the United States, reports ITV News.

Fentanyl is administered for pain through injection, a medical patch or in the form of a lozenge. Addicts mix it with heroin or cocaine to increase its potency. Once administered, it pumps up the brain’s dopamine levels, producing a state of euphoria and relaxation.

After taking fentanyl, a user also may experience drowsiness, respiratory depression and arrest, nausea, confusion, constipation, sedation or unconsciousness. Ultimately, some users fall into a coma and can die.

The Midwest Medical Examiner’s Office, in Ramsey, Minn., which conducted the autopsy and then released a copy of its findings, declined comment. But the Carver County Sheriff’s Office continues to investigate Prince’s death with help from the Drug Enforcement Administration. The sheriff’s office is looking into whether opioid abuse was a factor in the singer’s death. Painkillers were found on Prince’s body when investigators arrived.

While the loss of the music icon is devastating to the music world and his dedicated fans, Prince’s death reminds us of the deadly consequences associated with self-administering highly addictive drugs. Opioids manage pain but do not treat pain, creating a never-ending cycle of abuse.

Prince was cremated in a private ceremony on April 24, 2016. His family plans to stage a public memorial in August.