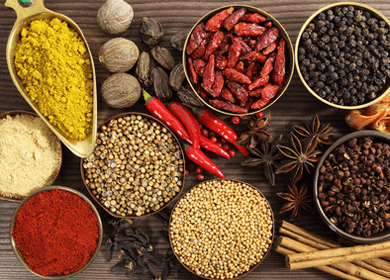 Hot! hot! hot! That’s the word on spice. Not just in the culinary world but in the scientific community, as well. Flavor is the least of it, although that’s certainly reason enough. 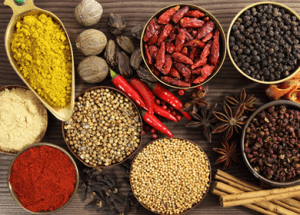 Take cayenne pepper, that red chili loaded with capsaicin, which makes your mouth burn if you get enough of it. Well, it burns your body fat, too. In easily tolerable amounts–one gram added to tomato soup–it both increases energy expenditure and feelings of satiety.

“That’s a modest culinary dose,” observes Guy Johnson, a nutritional scientist who is executive director of the McCormick Science Institute, but it offers a subversive approach to one of the most intractable problems of modern life: Subjects who ate the pepper-spiked soup were able to curb their consumption of mac ‘n’ cheese served several hours later.

Spices typically stimulate all our senses, kick-starting digestion and metabolism as well. Not long ago, many were sought-after aphrodisiacs, believed to open pathways to passion. But spices do much more for our food and for us.

More than most ingredients, spices bring us a taste of the whole world. Civilizations have risen and fallen on the search for and trade in spices, for both medicinal and culinary uses. Black pepper, cumin seed, and nutmeg, which originated in the tropics of Southeast Asia and still are scented with the mystery of the East, have even served as currency itself. So special were spices that both words–special and spice– share a common etymological root.

With the expansion and routinization of trade, these once-exotic tidbits have become so commonplace that where they formerly inspired global exploration, spices now often serve as a culinary afterthought, retrieved from the back of a cabinet where they’ve been sitting for years.

But spices are enjoying a very piquant life in science. They’re the objects of significant research for an array of health benefits, from fighting cancer to protecting nervous system function to maintaining metabolic integrity. The use of turmeric, for example, substantially cuts blood levels of fats after a rich meal, and it lowers insulin levels, as well.

Much of the very newest research shows that spices have powerful effects on the brain, both in promoting cognitive function and preventing its decline.

For example, even in low doses–and consuming small amounts over long periods of time is the way most people consume herbs and spices–the herb sage improves memory and attention in healthy older adults, including times of the day when mental performance is known to decline.

Rosemary has been shown to increase the speed of working memory, a predictor of cognitive function in the aging process. Curcumin, the active ingredient in turmeric, has a measurable effect on mood; it induces neural growth factors in the brain, mimicking the action of the antidepressant Prozac.

A vaguely Indian spice blend containing turmeric and cloves, as well as rosemary, oregano, and thyme has been shown to boost cardiovascular health by improving the function of the cells lining arteries, and anything that boosts blood flow abets brain performance in general. The same spice blend added to hamburgers headed for the grill substantially protects the fat content from oxidation, reducing production of carcinogens.

Turmeric, a common component of Indian curries, protects neurons from Parkinson’s disease. A variety of recent studies show that it engages several mechanisms to maintain cognitive integrity, protect against oxidative stress, and reduce cognitive impairment. Curcumin also ameliorates neuropathology; it improves many of the abnormalities seen in Huntington’s disease.

Saffron, a spice not commonly used in American cuisine, inhibits the accumulation of toxic beta-amyloid in the brains of human subjects and helps fight moderate Alzheimer’s disease.

Even the scent of spices has notable brain effects. The smell of both peppermint and cinnamon enhances alertness and minimizes fatigue. Both increase general physiologic arousal, fostering attention, motivation, and the ability to maintain workloads. While not as effective as eating sage, merely smelling the herb boosts memory and mood. Consumption of cinnamon, a host of other studies show, consistently aids the management of healthy blood glucose levels.

Spices and herbs get their distinctive flavor–and their health punch–from the unique array of minerals, antioxidants, and other bioactive compounds concentrated in them. In most, the active ingredients are highly intense and volatile because they originate as chemical defenses in plants, designed by nature to ward off attack by animal predators or microbes, or destruction by the elements.

“Cinnamon,” says Jack Turner, author of “Spice: The History of Temptation” and an independent scholar, “is a natural form of armor; the seductive aroma of the nutmeg is, to certain insects, a bundle of toxins. The elemental irony of their history is that the attractiveness of spices is (from the plant’s perspective) a form of Darwinian backfiring. What makes a spice so appealing to humans is, to other members of the animal kingdom, repulsive.”

Spices differ from herbs in that herbs come from the leaves of plants, most of which grow in temperate zones, while spices are derived from the buds (cloves), bark (cinnamon), seeds (fennel), roots (ginger, turmeric), and other parts of plants native to the tropics. Both release their flavor components most fully when heated and retain full power if added toward the end of the cooking process.

In Indian cooking, however, spices may be cooked first, in oil, and mellowed together. They are often added in a strict sequence that has been worked out over centuries and has a very sophisticated chemical logic, in which one volatile element enhances the release of another.

“There’s no nutritional downside to using herbs and spices,” notes Johnson. “They have no calories. They have no fats. They make food more satisfying. They help modulate food intake. And they have components with substantial biological effects.”

Few home cooks treat spices with the respect they deserve. To get the most out of spices, it’s best to buy them whole, store them whole, and grind as needed.

Whole spices have a “flavor life” of a year, at most. Ground spices, which oxidize rapidly due to their vastly increased surface area, should be replenished every six months. Spices are best processed by grinding by hand with a mortar and pestle.

For flavor with a brain boost, use them liberally instead of salt.