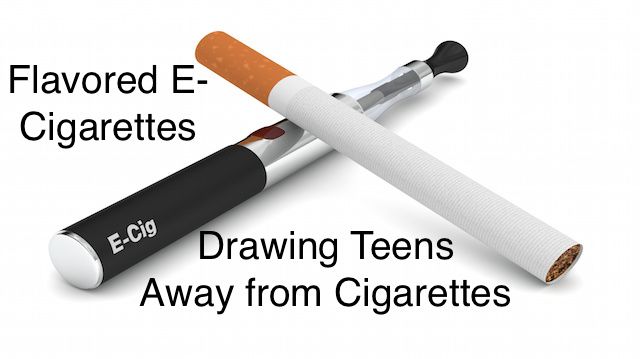 The results of the 2014 National Youth Tobacco Survey provided some startling statistics about the smoking habits of today’s youth. It was revealed that 2.5 million U.S. middle and high school students are using e-cigarettes or vaping, as it is also called.

Vaping on the Rise

According to the data compiled from 20,000 schoolchildren in the CDC’s annual youth tobacco survey, showed the indisputable rise of e-cigarette use overtook that of traditional cigarettes.

These findings quickly prompted a response from anti-tobacco advocates who warn that e-cigarettes are undoing previous progress on reducing smoking among teenagers. They feel e-cigarettes have normalized the idea of smoking tobacco products again, not to mention, the addictive component of nicotine.

Vaping among teens is of particular concern for health reasons. Adolescents are still going through a lot of growth and development, and especially with regards to brain development. Studies have already shown that smoking is linked with attention and memory issues, and e-cigarettes also contain nicotine that has been proven to cause harm to developing brains.

“This is a really bad thing,” said Dr. Thomas R. Frieden, the director of the U.S. Centers for Disease Control and Prevention (CDC). “This is another generation being hooked by the tobacco industry. It makes me angry.”

Cigarette smoking is the number-one cause of preventable death in the U.S., which claims the lives of more than 480,000 people each year. While scientists know that e-cigarettes deliver nicotine like traditional cigarettes do, they are not sure about other hazards when comparing the two types of smoking.

Since e-cigarettes are still relatively new, researchers are still gathering data on possible long-term effects on health. However, just because they are different from traditional cigarettes, does not mean they are less deadly.

They also contain a number of dangerous chemicals, and considering the fact that they are not regulated, it may be too late for many before the real hazards are realized.

Young people do not understand that there are still very real dangers lurking in the fancy e-cigarette packaging. In an interview with Tom, a 15-year-old sophomore student, he explained, “It’s the healthy alternative taking over my school.”

Many students start vaping in an attempt to quit smoking regular cigarettes or marijuana. They feel they are being healthier, but they are actually just swapping one dangerous habit for another.

In a study by Johns Hopkins Bloomberg School of Public Health, mice were divided into two groups: one that was only exposed to air and another that was exposed to e-cigarette vapor equal to amounts of human e-cigarette inhalation over a two-week period.

The study findings revealed that mice exposed to vapor had a significantly compromised immune system. Compared to the mice only exposed to air, they were far more likely to contract illness from flu virus and bacterium linked to sinusitis and pneumonia. In fact, some of the mice died from the illnesses they contracted.

“Our findings suggest that e-cigarettes are not neutral in terms of the effects on the lungs,” explained senior study author Shyam Biswal, a professor in the Department of Environmental Health Sciences at the Bloomberg School.

“We have observed that they increase the susceptibility to respiratory infections in the mouse models. This warrants further study in susceptible individuals, such as COPD patients who have switched from cigarettes to e-cigarettes, or to new users of e-cigarettes who may have never used cigarettes.”

How E-Cigarette Makers Are Luring In Your Children

The CDC has pointed the finger at the marketing concepts associated with e-cigarettes as the biggest appeal to teenagers. They say manufacturers use a combination of “sex, free samples, [and] flavors” to draw them in.

Today’s teenagers don’t even equate vaping as being in the same category as cigarette smoking. Another student, James said, “It was something for us to do that was edgy and exciting.” However, he clarified that he has never smoked regular cigarettes and couldn’t imagine doing so. “There’s a harshness to cigarettes. Girls think they’re gross.”

Many students like the ability to mix-and-match and “personalize” the vaping accessories.

“E-cigarettes appeal less towards the stereotypical long-haired stoners, and more towards sweatshirt-blue-jeans Silicon Valley programmer,” said a Florida high school senior, Kenny. “You can compare them to Apple computers.” 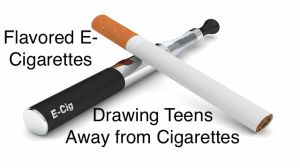 Are Flavored E-Cigs the New Candy?

The use of flavors to draw in young smokers is particularly appalling. Considering candy flavors are traditionally associated with kids, it seems obviously aimed at luring in young people rather than adults.

According to research, the two favorite flavors among teenaged vapers are Unicorn Puke and Sweet Tart. Students have described them as “every flavor Skittle compressed into one.” Another popular flavor, Hawk Sauce, has been described as “a berry menthol kind of thing.”

What about those seemingly innocuous chemicals lending the e-cigarettes their flavor? Are they really harmless? According to research by Portland State University, the flavoring chemicals may be present in quantities that make them unsafe for inhalation.

“A lot of e-cigarette manufacturers are representing that the components are food grade and implying that these are safe for use in e-cigarettes,” pointed out study co-author Jim Pankow, a chemistry professor at Portland State University. “But all of the safety studies have been for ingestion, not for inhalation.”

Unfortunately, data on inhalation safety is limited for many of the chemicals involved, with notable exception to vanillin and benzaldehyde. So Pankow and his team focused on these two ingredients that were found in multiple liquids.

They are both known to be irritants to the respiratory tract; therefore, they could affect breathing. The researchers calculated that e-cigarettes could deliver as much as double the exposure limit for those chemicals throughout the period of a day.

Let’s Not Forget about Formaldehyde

In a separate study by Pankow and his team, e-cigarette vapor was found to contain as much as 15 times the amount of formaldehyde as is found in a traditional cigarette.

“We’ve found there is a hidden form of formaldehyde in e-cigarette vapor that has not typically been measured. It’s a chemical that contains formaldehyde in it, and that formaldehyde can be released after inhalation,” explained Pankow. “People shouldn’t assume these e-cigarettes are completely safe.”

An important finding of the research was that at the high voltage some e-cigarettes are capable of, enough formaldehyde-containing compounds were released into the vapor that could increase a person’s risk of developing cancer by up to 15 times more than through long-term smoking of regular cigarettes.

“Until these things are monitored and regulated, there’s a real potential risk for unexpected exposure to toxic chemicals,” said Eric Jacobs, strategic director of pharmacoepidemiology for the Cancer Society. “We really don’t know what kind of exposure the users might get when using any particular product at any particular heating level.”

“This study shows how little we know about toxic exposures that can result from using any one of the many different available types of e-cigarettes at different heating levels,” said Jacobs.

At this point, e-cigarettes are not regulated like their traditional counterpart. The FDA has shown interest in putting forth regulations. In fact, they proposed federal restrictions in April 2014 that would bring e-cigarettes under the same regulations that govern tobacco, but it doesn’t expect to finalize anything until possibly June of this year. Possible future regulations might include age restrictions for purchasing the product and prohibiting free samples from being given out.

One of the biggest problems with control of e-cigarettes is their easy accessibility to children. While some tobacco companies like Logic Technology may only be offering their e-cigarettes in brick-and-mortar stores where identification is required, others do not.

It’s the vast number of vape shops and equipment available online that poses the real problem with underage access. In many of these instances, kids need only push a button claiming they are 18 in order to complete a purchase. However, kids can just as easily go to their 18-year-old friends and ask them to buy the products for them.

The equipment needed for e-cigarette smoking includes batteries often shaped like a cell phone or cigarette; liquid reservoirs, also referred to as tanks; battery chargers, and cartridges. Once a teenager has obtained the basic equipment, it is very easy for them to purchase the liquid component over the Internet.

“You can just go online and click yes,” said Ethan deLehman, a 17-years-old junior at a private school. He originally began using e-cigarettes after asking senior students to purchase them for him. Now he buys his own liquid online; his particular favorite flavors are Caramel Tobacco and Creamsicle.

E-cigarette starter kits can cost anywhere between $40 and over $200. The liquid component costs up to as much as $20 a bottle. Though it’s pricey to get started, it’s cheaper over the long run than buying regular cigarettes, which is undoubtedly another reason why people are trying it.

“It’s cheaper overall for how much I smoke,” said Alexander Wilson, who began smoking regular cigarettes at the age of 15. He switched to e-cigarettes to reduce his regular smoking habit, as well as to save money.