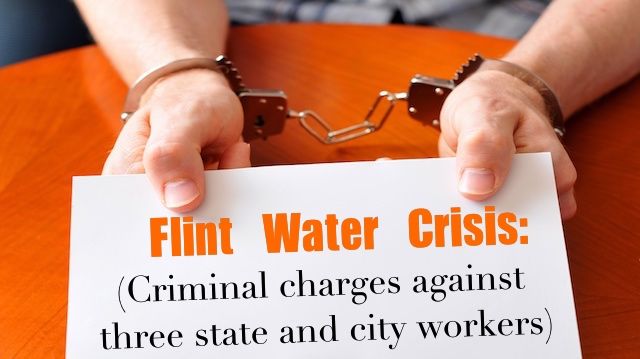 We previously reported on the horrifying conditions in Flint, Michigan, and today it looks like justice is finally being served. Three state and city employees have now been charged with felony and misdemeanors related to the Flint water crisis.

Charges were authorized for Flint, Michigan, city employee Michael Glasgow and Michigan Department of Environmental Quality (DEQ) employees Stephen Busch, a supervisor with the DEQ’s Office of Drinking Water, and Michael Prysby, a district engineer, on Wednesday, April 20. Michigan Attorney General Bill Schuette brought the charges to the court, and Genesee District Court Judge Tracy Collier-Nix authorized the charges. None of the men or their attorneys were present at the time.

Glasgow, a Flint city utilities administrator, is being charged with willful neglect of office and is accused of tampering with testing evidence. He allegedly changed results after testing the water in Flint to show that the lead content was less severe than in reality. Glasgow faces up to four years in prison for his tampering with evidence charge, a felony offense.

The two DEQ employees, Busch and Prysby, are charged with conspiracy to tamper with evidence, tampering with evidence, misconduct in office, and a monitoring violation of the Michigan Safe Drinking Water Act, as well as a treatment violation for the same act. Both men face up to five years in prison for felonies committed, but that punishment seems small in comparison to the health problems residents of Flint may have to live with for years to come.

Flint resident Nakiya Wakes said charging Glasgow, Busch and Prysby is a start, but more needs to be done. “I won’t rest until the governor is charged,” she told CNN. “It was his person who pushed the change of water supply through and he knew there were problems but did nothing.”

In April 2014, the water source for Flint, Michigan, was changed from Lake Huron to the Flint River, regardless of the fact that the river has a long history of smelling, looking and tasting horrible. Virginia Tech researchers even revealed that the lead content in the Flint River was at toxic and poisonous levels.

Residents in the area are primarily low-income and African American, and despite the fact that the decision to route water from the river was reversed, people have gotten sick. For example, an outbreak of Legionnaire’s disease in the area may be a direct consequence of sourcing water from the Flint River. Legionnaire’s disease, or Legionellosis, is a respiratory disease caused by bacteria that infect the lungs and cause pneumonia. The Legionella bacteria is commonly found in fresh water and can invade the body through the aspiration of water, including drinking water. Experts claim that the outbreak, which started in 2014, is too coincidental to not be linked to the unhealthy Flint River water being pumped to homes in the area.

Other health problems related to the water include hair loss, vision loss, depression, anxiety, skin lesions and memory loss. The water has shown to contain high levels of carcinogens and toxins, like lead, as well as E. coli, and there are continued concerns about miscarriages and learning disabilities in children.

The next step in the process is the formal arraignment of the three men charged. Given the state of things, justice can’t come soon enough. Hopefully, we’ll see more charges brought to the court for all the wrongdoings in Flint, Michigan. Residents deserve justice and we’re happy to see legal action being taken against those responsible.