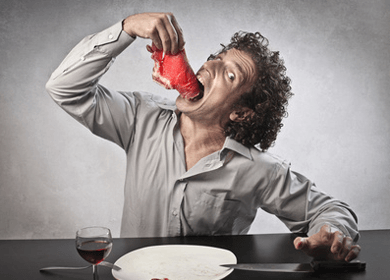 Red meat isn’t just a type of food–it’s a deep-rooted part of our culture. Many of us were raised at a time when no dinner was complete without a hearty portion of meat and potatoes. Every July 4th, we fill our grills with hot dogs and hamburgers, and from November through New Year’s, meat is often the centerpiece of holiday meals.

Though we may love the taste of bratwurst, bacon, and steaks, our carnivorous habits are endangering our health, research shows. Several studies have linked diets high in red meat (veal, beef, lamb, and pork) to cancer, diabetes, and heart disease. A recent report by Dr. Walter Willett and colleagues at the Harvard School of Public Health went a step further, suggesting that regularly consuming red meat could even lead us to an untimely death.

The report, which included more than 83,000 women enrolled in the Nurses’ Health Study, suggested that people who ate one additional 3-ounce serving of red meat daily faced a 13 percent higher risk of premature death. If that serving was of processed meat (such as bacon or hot dogs), the risk went up to 20 percent.

WHAT’S SO BAD ABOUT RED MEAT?

Why is red meat so detrimental to our health? Dr. Willett, the Fredrick John Stare professor of epidemiology and chair of the Department of Nutrition, points to three possibilities. One is that red meat is high in saturated fat, which raises the risk of heart disease. Meanwhile, it’s high in cholesterol and a type of iron called heme iron, which have been linked to increased risks of heart disease and heart attacks.

“I suspect it’s a combination of all of those factors,” Willett says.

If steak and burgers are bad for our health, then processed meats, such as bologna and hot dogs, appear to be even worse. “They tend to have a much higher sodium content, which we know is undesirable,” Dr. Willett says. Excess sodium raises blood pressure, putting extra strain on the heart and kidneys. Processed meats are also high in unhealthy saturated fats, as well as nitrates–preservatives that have been linked to cancer.

Nutritionists often recommend that if you do eat meat, choose leaner cuts such as top sirloin or bottom round roast, and cut off any visible fat before cooking it. Yet Dr. Willett’s team found that even the most careful trimming doesn’t seem to have much of an impact on health outcomes, suggesting that other factors in the meat may be responsible for its health risks.

“It’s not just the fat that’s the villain,” Willett says.

It’s also not clear exactly how many servings of red meat you need to eat in order to introduce health problems, so cutting back is the safest strategy.

“Whatever your current intake is, if you reduce it there will be some benefit,” Dr. Willett says.

You don’t need to transform yourself into a vegetarian to protect your health, but you can make modest improvements to your diet by gradually cutting back on the amount of meat you consume. In the Harvard School of Public Health study, substituting a healthier source of protein for just one daily serving of red meat lowered participants’ risk of dying prematurely. Switching to poultry dropped the risk by 14 percent, eating nuts lowered it by 19 percent, and substituting fish reduced it by 7 percent.

If you’re worried that avoiding red meat will leave you lacking in essential nutrients, such as iron and zinc, don’t be. Dr. Willett says you can easily get these nutrients from other food sources.

“With poultry and especially nuts, you get lots of minerals and vitamins, and fiber, in one healthy package,” he notes.

Cutting back on red meat also doesn’t mean that you have to deprive yourself of flavor.

“There’s a huge variety of alternatives to red meat,” Dr. Willett says. “Other cultures have evolved thousands of alternative ways to get protein, and many of them revolve around legumes and beans. Americans are mostly unaware of how interesting and how flavorful you can make dishes out of beans.” He also cites nuts as a healthy and tasty protein source, which you can use as a topping for salads, or to make flour. “They’re great because they come in so many different flavors.”

As studies like this one make their way into the media, Americans are getting the message about red meat–and eating less of it as a result.

“Since we started our study of health professionals, red meat consumption of participants has gone down by 50 percent,” Dr. Willett says. “People are making changes, but it doesn’t happen overnight.”

As a first step, try putting a chicken breast or piece of salmon on the grill instead of the traditional beef burgers and hot dogs the next time you cook out. You might be surprised at how good these alternatives can taste, and how little you’ll actually miss red meat.