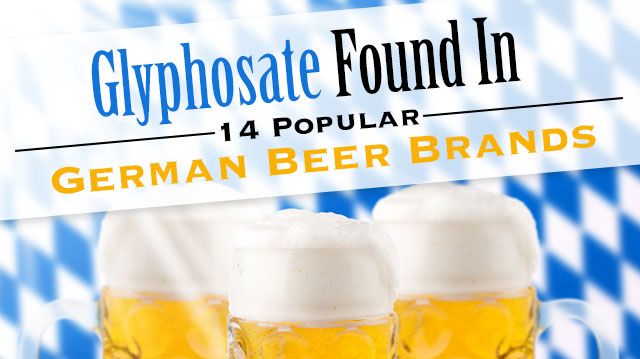 When you sip on your favorite ale, you probably expect to be imbibing a pleasantly fizzy mix of water, hops, malt, and yeast. But a recent study suggests that beer, specifically German varieties, may include at least one extra ingredient — and it’s probably not one you want to be drinking. In fact, that beer you’re sipping may contain glyphosate, the active ingredient in Monsanto’s weed-killer Roundup.

An independent investigation performed by The Munich Institute, a German environmental group, recently found glyphosate in 14 popular German beer brands — 100 percent of the brands that were tested. The concentrations of the chemical ranged from 0.49 micrograms per liter to 29.74 micrograms per liter.

The news was seen by many as a blow to Germany’s beer industry, which is known for its “pure” beers and high brewing standards. Water, hops, malt, and yeast are the only ingredients permitted in German beers, according to a law that recently marked its 500th anniversary.

Naturally, the German beer industry rejected the study’s findings, saying it was based off a small number of samples, and that the levels of glyphosate found were too small to have any health effect. They also noted that people shouldn’t be worried because traces of glyphosate are found “almost everywhere.” (Is that supposed to make us feel better?) We think it’s probably a good idea to take the study seriously.

The World Health Organization (WHO) classifies glyphosate as a probable human carcinogen, which means it’s likely that the chemical causes cancer. Health conditions that were linked to glyphosate in a 1993 report by the National Academies include, “cancer, acute and chronic injury to the nervous system, lung damage, reproductive dysfunction, and possibly dysfunction of the endocrine and immune systems.” More recently, glyphosate has been linked to an even wider range of health problems and diseases, including chronic kidney disease, infertility, and Parkinson’s disease.

The amounts of glyphosate found in the beers were technically low, but as the environmental organization that performed the study points out, “It does contribute to the overall levels of chemicals consumers are exposed to….” In fact, the German beer industry itself said that traces of glyphosate are found “almost everywhere,” and they’re right! 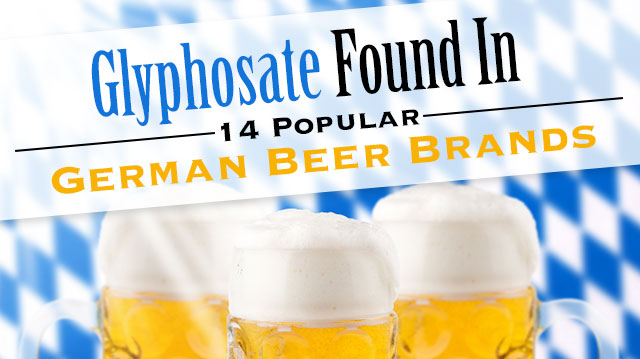 We are not only ingesting glyphosate from beer. Glyphosate has been found in cereals, meat (as many farm animals are exposed to high levels of Roundup), baby formulas, and even breast milk, as well as many other foods made from GMO crops — especially soybeans. One study even found that 75 percent of rain and air samples contain Roundup. And this doesn’t even address the fact that when pesticides, like many other chemicals, are mixed together, their effects are often more harmful than they are on their own. So saying that glyphosate is found “almost everywhere” is no excuse. It’s the problem!

What about American beer?

Although no similar studies of American beer have been carried out, most American beers use GMO wheat, which means there’s likely still some glyphosate hanging around in the finished product. However, it is possible to find GMO-free beers. Two beers, Peak Organic and Wolaver’s Fine Organic Ale, have both been verified as GMO-free by the nonprofit organization, the Non-GMO Project; they are therefore less likely to contain glyphosate. Mainstream beers that are not officially verified, but are generally accepted as GMO-free, include Sierra Nevada, Heineken, and Amstel Light. Certified organic beers are also a good bet, as they are required by law to be GMO-free.

Find out more about other healthy beers, as well as how to start making your own!