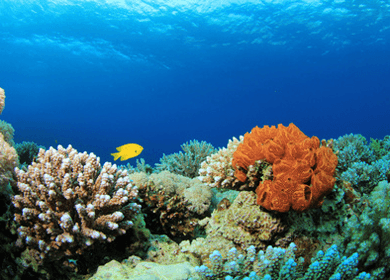 Millions of zooplankton in our oceans call coral home while coral, in turn, calls the zooplankton dinner. Coral is a living sea creature that feeds off of the millions of zooplankton that make their home in and amongst coral reefs. The symbiotic relationship that exists between the coral and the microscopic zooxanthellae algae is highly sensitive to a number of things including pollution and changes in sea temperature.

Just a small rise in temperature is enough to force the coral to evict their tenants, which in turn causes them to become stressed. The algae is responsible for the beautiful color of coral, and when they leave, the coral becomes a bleached white color. If the coral refuses to allow the algae to move back in, the coral will eventually die. This causes a complete disruption in the marine ecosystem that is very far reaching.

Coral reefs make up less than 1% of the Earth’s surface but serve a great importance. They shelter up to 25% of all marine species protect our shorelines and support fishing industries. Coral reefs have also been referred to as the medical cabinets of the 21st century. The reefs and the animals they shelter are important sources of developing research and medicine related to such conditions as heart disease, viruses, bacterial infections, arthritis and cancer.

When sea temperatures rise, as a result of climate change, bleaching occurs. Researchers fear that based on current emission trends, that coral bleaching will continue to become more severe and widespread. Findings from recent studies indicate that unless radical measures are taken to reduce carbon emissions, up to 74% of reefs in the world will be affected by annual coral bleaching events by 2045.

What Can be Done?

Reducing our carbon footprint not only saves energy but also keeps greenhouse gases out of the atmosphere. Fewer greenhouse gases mean less climate change and lower ocean temperatures. Walk or ride a bike instead of driving, plant a few trees each year and contact your local legislators to let them know that you support comprehensive climate legislation.