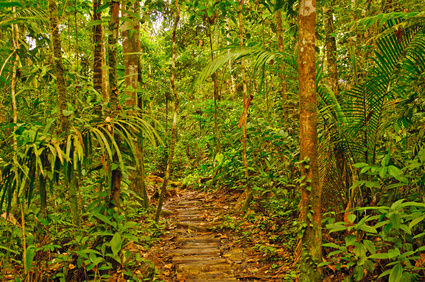 It is sometimes known as ‘stinking toe,’ as its seedpods are reminiscent of large toes and have a pungent odor. The tree sports white flowers that are pollinated by bats.

Traditionally, jatoba bark and resin have been used for a large variety of purposes – ceremonial, functional and medicinal. Ceremonially, jatoba resin has been a part of love potions and wedding ceremonies, and burned as incense.

The resin has also been used as a pottery glaze, and the durable and termite-resistant wood – which does not rot even after the tree dies – is often used in construction and carpentry.

Since ancient times, jatoba has been used in natural remedies for ailments including coughs and bronchitis, diarrhea, ulcers, vomiting, hepatitis, prostatitis, chronic pelvic pain syndrome (CPPS) and bladder infections. In the US, it is often marketed as an energy tonic.

The fact that jatoba wood does not rot or mold clued researchers in to its potential as a fungus-fighter. Indeed, jatoba can be used to help cleanse the body of candida and other fungus-related problems. It is sometimes applied as a topical salve to help heal athletes foot and nail fungus, among other fungal infections.

Jatoba also has notable antibacterial and anti-inflammatory properties. A study performed at the University of Brasilia in Brazil found that the phytochemicals, including phytic acid, in jatoba could help reduce swelling and irritation. It may also be beneficial in combating a wide array of harmful organisms, such as bacteria and viruses.

The most common way to use jatoba is by steeping the bark in boiling water to make a tea. It is also sold as a tincture at health food stores, which is a more concentrated form. Always make sure you choose organic, pure jatoba, without any additives or preservatives, as these detract from the health benefits.

As it is a potent remedy, be sure to check with a health professional before beginning a regimen with jatoba. No toxic effects of jatoba have been found in research so far, but it’s always best to check with someone familiar with your individual body chemistry, medical history, and needs just to be sure.

Our planet’s rainforests are filled with unique trees and plants, many of which have celebrated healing properties. The jatoba tree is just one of the many reasons why we should increase our efforts to protect our precious rainforests from further harm.