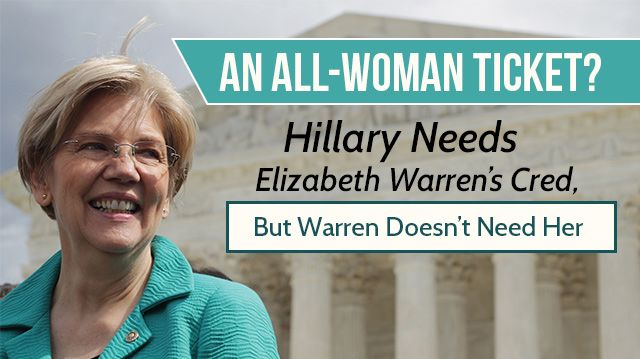 Sen. Elizabeth Warren (D-Mass.) isn’t afraid of much, especially a bully like Donald Trump, and she’s no stranger to Washington politics. This has led some people to speculate that Warren should be named Hillary Clinton’s running mate. While choosing Warren would definitely placate Bernie Sanders voters, that concession might be the only reason it would be a good idea for Clinton to choose her for a running mate. There’s also no evidence that Warren supports Clinton.

Sen. Warren is a fighter. She’s not afraid to get down and dirty in politics in a very public way. She recently went after Sen. Ted Cruz on Twitter, tweeting: “We’re supposed to pity you because trying to be the leader of the free world is hard?! 2 words: Boo hoo.”

She followed with tweets that sound more like DNC battle cries:

“You chose to run for President, @TedCruz. You chose to make your ‘sacrifices.’ Working people don’t have a choice.” Followed by, “Hey @TedCruz: Maybe you should spend less time complaining about your ‘significant sacrifices’ – & more time doing something about theirs.”

She definitely has the gumption needed for the VP seat, and even The Donald seems worried about it, tweeting, “I hope corrupt Hillary Clinton chooses goofy Elizabeth Warren as her running mate. I will defeat them both,” on May 6.

She replied with, “I called out @realDonaldTrump on Tuesday. 45 million saw it. He’s so confident about his ‘counter punch’ that he waited until Friday night. Lame.” She also criticized his use of the word “goofy” when he described her, and she has a point. “For a guy with ‘the best words’ that’s a pretty lame nickname. Weak!” What followed was a pretty entertaining stream of biting tweets between the two.

Yet Warren has butted heads with Clinton in the past

Twitter wars aside, Sen. Warren has a lot going for her. Not only has she served in the Senate, she’s also a former Harvard Law professor with a specialty in bankruptcy law. In fact, in 2004, Sen. Warren appeared on the Bill Moyers show and discussed a meeting she had with then-First Lady Clinton on the subject.

Before she was a senator, Warren wrote an Op-Ed about bankruptcy legislation that was heavily sponsored by major credit card companies during the Bill Clinton presidency. The bill would result in fewer families being eligible to file for bankruptcy, thereby making more money for the credit card companies at the expense of many middle class families. Clinton read the article and the White House called Warren, asking for a meeting with the First Lady during her planned trip. Naturally Professor Warren agreed. Who wouldn’t want to meet the First Lady?

The two women sat down in a room together over burgers and fries and Clinton asked Warren to explain bankruptcy law to her. “I’ve never had a better student,” Warren said, recounting the story. After the two hashed through existing laws and what the proposed bill would do to middle class families, according to Warren, Clinton replied with, “Professor Warren, we’ve got to stop this awful bill.”

President Clinton had been backing the bill quietly, framing the support as a move that was good for business, but when Mrs. Clinton heard about it she blazed a trail straight to his office. By all accounts, Democratic supporters of the bill practically suffered whiplash from changing their positions so quickly once Hillary fully explained what was going on.

Warren praised President Clinton for his eventual veto — when the bill passed the House and Senate near the end of President Clinton’s second term, he vetoed it — and says that Hillary was very much responsible for that decision by the president.

Warren points out, however, that when Clinton became a senator one of the first bills to come up was the bankruptcy bill, and Clinton voted in favor of it. “As Sen. Clinton, the pressures are very different,” Warren conceded, explaining how much pull the credit companies have in D.C.

In fact, after the fifth Democratic debate in February 2016, when Clinton said, “You will not find that I ever changed a view or a vote because of any donation that I ever received,” the Sanders campaign used Warren’s own words against Clinton.

Issuing a news release boldly titled, “Elizabeth Warren on How Wall Street has influenced Hillary Clinton,” the Sanders campaign pointed to Warren’s 2003 book, The Two-Income Trap, which showed how campaign contributions from big banks influenced Clinton’s flip-flop on the bankruptcy bill that she so adamantly opposed as the FLOTUS.

Clinton’s response on ABC’s “This Week,” which aired on February 7 was, “I didn’t like the bill any more than I had liked it before. It still had very bad provisions. But I also pushed hard for a deal to protect women and children. So okay, I held my nose. I voted for it.” It’s worthy of note that the final version of the bill never saw the light of day and when a similar bill popped up in 2005, Clinton opposed it.

“Right now, we are focused on the next five weeks of winning the Democratic nomination. If that does not happen, we are going to fight as hard as we can on the floor of the Democratic Convention to make sure that we have a progressive platform that the American people will support,” Sanders said. “Then, after that, certainly Secretary Clinton and I can talk and see where we go from there.”

When Sanders supporters are asked about Sen. Warren as a potential running mate for Clinton, however, about half of them wouldn’t be happy with the choice. Sanders supporters are a dedicated bunch, so it’s unlikely anyone other than Sanders himself would poll well among his crew. So, while it looks like a good reason on the surface, upon further examination, Warren may not be the best candidate for VP.

Warren may be more valuable in the Senate

As Newsweek’s Taylor Wofford wrote in early May, Warren is “the progressive wing’s darling,” and Sanders supporters would likely be very happy to see her named as Clinton’s running mate. But, Wofford points out, there’s significant value in Warren remaining in the Senate. There, she’s able to be outspoken about her views and the liberal platform. Attacking Republicans on Twitter would be far more difficult as veep.

There’s also the matter of Senate votes to consider. Hidden by all of the drama of the presidential election is the fact that there are 34 seats in the Senate up for grabs this November, as well as 435 House seats. Since Warren’s term doesn’t end until January 3, 2019, her seat is secure this time. However, if she becomes vice president, her replacement would be picked by Massachusetts’ Republican governor. This would be a move in the opposite direction for the Democrats, who are trying to take back control of the Senate. The balance is currently 54 Republicans to 44 Democrats, with two Independents.

She doesn’t want the job

Perhaps the biggest deterrent to a Warren VP appointment is that she doesn’t want it. Just today, Warren said she’s happy where she’s at. “I love my job. I’m here in the United States Senate doing exactly what the people of Massachusetts sent me here to do,” Warren said. “I’m in the thick of the fights to try to level the playing field, to try to un-rig this system, and that’s what really matters to me.”

She finished the line of questioning with, “For me, I’m going to keep doing my job every single day and I’m not thinking about another job.”

Never Eat These 2 Foods Together (Pizza and Soda)