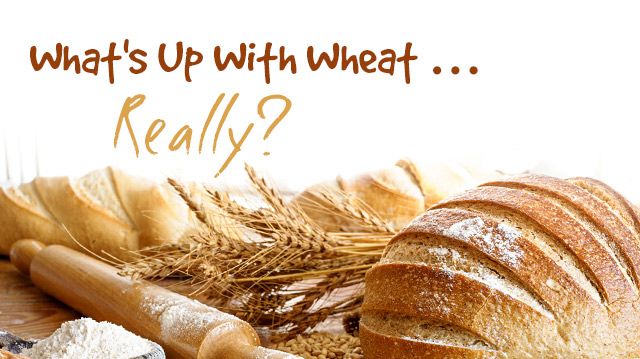 Wheat is increasingly receiving negative attention in the media, and by now most people are unsurprised to hear that it can be damaging to our health. A growing body of research points to certain proteins, namely gluten, lectins and phytates, as the main instigators of autoimmune response and other health issues that result from eating wheat.

While there is no doubt that these proteins are responsible for widespread health issues in the grain-dependent Western world, there has until this point been something missing from the equation. The variability of response to wheat in different situations suggests that there must be something else in wheat that is causing health issues in some people. Someone who gets sick from eating bread or pasta in the United States, for example, may not have any adverse effects from eating bread or pasta in France or Italy. Often people who have developed gluten sensitivity to conventional grain-based products may suffer no ill effects when they switch to organic wheat. There is even variability within America, with different wheat products causing varying degrees of health problems. Why is that?

The answer, unfortunately, is not a very pleasant one. Based on information provided by the US Department of Agriculture, it appears that it is routine practice for American farmers to dump a large dose of Roundup, a broad-spectrum herbicide, on wheat crops a few days before harvest. The active ingredient of Roundup is glyphosate, a toxic chemical that is designed to essentially kill off anything it comes into contact with.

This process of literally bombing wheat crops with Roundup prior to harvest has been shown to increase yields and ensure homogeneity amongst the crop. Exposing wheat to the deadly chemical glyphosate in Roundup causes the wheat to release a burst of seeds before it dies off. Kind of like a last-gasp attempt to give life before the chemical apocalypse hits.

Monsanto, the infamous manufacturer of Roundup, claims that applying it to wheat at over 30 percent kernel moisture causes the plant to absorb Roundup into the kernel, what we would consider to be the grain. Farmers support this method, as it kills off the wheat plant, allowing for an earlier harvest; increases yield; and forces all the wheat in any given field to ripen evenly, ensuring a uniform crop.

It’s a purely commercial decision and one that gives absolutely no consideration to the health of people or the land. Applying a toxic chemical like Roundup so close to harvest, and in such high volumes, means that it’s highly likely most of the wheat-based products you’re eating in the United States contains at least trace levels of this poison. What’s more, when Roundup is applied in the same way on malt barley used to produce beer, it is considered unsuitable for consumption. Likewise, lentils and peas that have been treated with Roundup prior to harvest are banned from market and supermarket shelves. But apparently when it’s used on wheat, there’s no problem at all.

According to the US Department of Agriculture, the use of Roundup in the United States has been increasing steadily over the past 17 years, corresponding to a dramatic rise in celiac disease. While the herbicide industry and money-grabbing farmers maintain that glyphosate is non-toxic to humans, research suggests otherwise. A 2013 study published in the journal Entropy examined the role of glyphosate in relation to the gut biome, concluding that it can severely damage the gut flora of mammals (humans included) and result in the development of chronic diseases.

The research of doctors Anthony Samsel and Stephanie Seneff showed that measurable concentrations of Roundup were found in many of the foods we eat on a day-to-day basis. The buildup of the toxin glyphosate in our bodies as a result of this Roundup contamination leads to the destruction of the villi in our guts, thus reducing our ability to absorb vitamins and minerals. Glyphosate also inhibits our body from breaking down the tough protein gliadin, which is found in high levels in wheat and other grains. Things get worse when glyphosate actually attaches itself to the gliadin proteins, triggering an autoimmune reaction that can lead to a whole host of health problems.

The damage caused by Roundup doesn’t stop there. Glyphosates contained in foods contaminated with Roundup block the production of cytochrome P450 (CYP) enzymes normally produced by bacteria in our gut. These enzymes are essential to good health, as they work to detoxify the plethora of environmental toxins that we are exposed to every day. The result is that consuming non-organic wheat products, along with certain corn and soy foods, can make us even more vulnerable to the damaging effects of other chemicals and environmental toxins — essentially creating a snowball effect, whereby your health rapidly begins to decline from something so innocent-seeming as a sandwich or bowl of pasta.

For many of you, this information may not change anything — wheat has just become that much more dangerous, and you’re thanking your lucky stars you removed it from your diet. For others, this should be the wake-up call you’ve been needing — eating wheat just isn’t worth it, especially if it comes from non-organic sources.

Still lacking the motivation to give up wheat? Here are eight more reasons why it’s bad news!