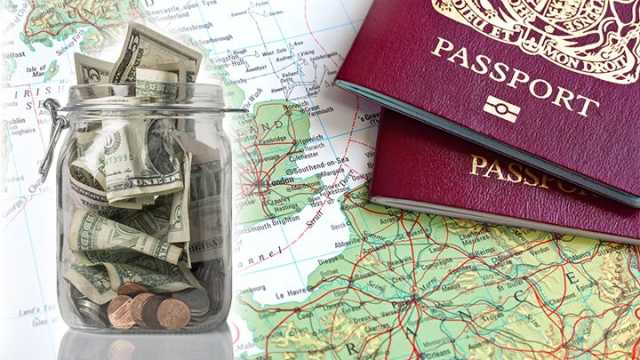 There I was, like so many others, forking over five dollars for a specialty coffee that I could have easily made at home. Yet, just the other day I complained to a friend that a vacation was not in my budget. So, I decided to calculate the number of times I had spent five dollars over the past week. And that’s when I had “ah ha” moment. What if, instead of spending five dollars, I actually saved five dollars a day? After one year I’d have a cool $1,825 tucked away for a vacation. Here’s how I made that dream come true.

I stopped buying breakfast on the go

Packing your lunch is an obvious way to save daily cash, but what about breakfast? A growing number of commuters brown bag their lunch, yet still head for the drive-through for a breakfast sandwich and coffee — I was one of them. That’s about $120 per month or just over $1,400 per year! To save $1,400 per year, I set my alarm about half hour earlier each morning to allow time to make breakfast. My favorite breakfast includes a smoothie packed with protein, fruit and greens, and a homemade muffin made with healthy berries, nuts and seeds.

I make my own lattes

My favorite coffee indulgence is a vanilla bean latte. But instead of forking over my hard-earned cash for a coffee-shop specialty, I brew my own. It also gives me the opportunity to use organic coffee, raw honey and real vanilla instead of sacrificing my health for sugary coffee-shop syrups and artificial flavors. But there are occasions throughout the week that I still meet up for coffees or grab one on the fly. But instead of opting for expensive lattes, I choose the house brew, which saves me about three dollars a cup.

I dine at home as much as possible

Everyone loves to dine out on occasion, especially when exhaustion sets in after a long day at work. But according to the Bureau of Labor Statistics, in 2015, the average amount consumers spent on restaurants and takeout reached $3,008, which equals about eight dollars per day. However, between 2015 to 2016, Fox News reports that for the first time in history, Americans have spent more on dining out than they did on groceries. The problem is, 69 percent of Americans have less than $1,000 in their savings accounts.

To avoid the temptation of dining out on a busy weekday, I use my slow cooker to prepare dinner. I simply throw in ingredients before work, and by 5:00 or 6:00 p.m., dinner is ready. In addition, I often prepare meals on the weekend, which I then freeze in glass containers. Come work week, I just pop them in the oven to heat.

I skip the soda

Even if you choose to dine out for lunch or dinner, ask for water instead of soda. At a fast-food joint, you’ll pay up to two dollars or more for a soda. Do that a few times a week and you’ve saved five dollars. While that may not seem like much, remember, every little bit can go towards your vacation. In fact, even at home, choose water instead of soda. You’ll not only save your health but also about $25 per month.

Going grocery shopping without checking your fridge or pantry first could mean spending money on duplicate items. In addition, buying food in bulk may seem like a good idea in theory, but if it spoils before you have a chance to eat it, then you might as well be throwing your hard-earned money in the trash. According to congressional testimony by Natural Resources Defense Council senior scientist Dana Gunders, 40 percent of food in the U.S. gets trashed. In fact, Gunders says that the average family of four spends roughly $1,500 every year on food they never eat. That means about $4 a day that is literally thrown away. Whenever possible, save by planning ahead for weekly meals before you go shopping.

According to congressional testimony by Natural Resources Defense Council senior scientist Dana Gunders, 40 percent of food in the U.S. gets trashed. In fact, Gunders says that the average family of four spends roughly $1,500 every year on food they never eat. That means about four dollars a day that is literally thrown away. Whenever possible, save by planning ahead for weekly meals before you go shopping.

I use apps to save money on groceries and gas

Apps like Grocery Pal by iTunes can help you save money by searching out weekly sales at your local supermarkets and discount stores. Moreover, apps like Gas Buddy can help you find the best gas prices in town.

I find free or low-cost ways to entertain myself

Nature is free. Hike nearby parks and trails instead of paying through the nose for expensive amusement parks. Check with your local museum and art galleries for free admission days or nights. Invite friends over to watch a movie rather than going to the theater. Also, take advantage of free lectures at the public library or a nearby university. I live in a small town but am often surprised at how many events take place in my community, many of which are free.

I do my own nails and hair color

Manis, pedis — they really do add up. An average manicure costs about $20 and an average pedicure around $30. In fact, if you’re like many women who frequent salons, you’re paying about $1,800 per year! Color and highlights bring that figure way up. Instead, pick up a few bottles of your favorite nail color and give yourself a weekly mani-pedi. When it comes to cuts — okay, leave that to the stylist. But when it comes to coloring your hair, grab a box from the drug store and do it yourself. You’ll save loads towards your vacation.

If you frequently grab cash from your local ATM instead of your bank’s network, then you’re probably throwing away anywhere from three to seven dollars for each transaction. So, the next time you visit the grocery store, avoid unnecessary charges by using your own bank’s services.

I stash cash in a jar

A friend of mine gave me a little secret. Starting on the first of January, and on each day that follows, for one year, she tucks five dollars into a jar. Why? So that she doesn’t rack up her credit cards during the holiday season.

Well, if it works for holiday cash, why not for a vacation cash? To avoid stealing back your money, deposit your cash into an account dedicated for your vacation on a weekly basis. This alone will save you $1,825 by the end of the year. But don’t stop there. Add loose change to the jar, birthday money and any unexpected windfalls. This, along with some of the saving suggestions above, might help you get to Europe sooner than you expected. Bon voyage!