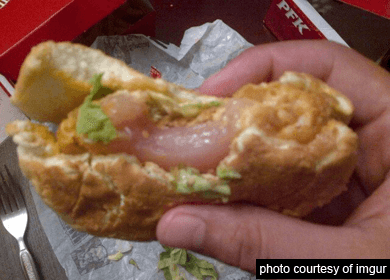 In a weekend Reddit post, a KFC patron in Canada provided a picture of a raw chicken sandwich they had just taken a bite of moments earlier. While chicken is considered a lean protein alternative to beef, products from KFC fail on so many levels it is hard to describe them adequately.

Raw chicken is simply unacceptable at any restaurant, fast food or otherwise. You wouldn’t serve raw chicken in your home and you certainly should not accept it from an eating establishment.

Raw chicken is well known for potentially dangerous high levels of salmonella contamination. Salmonella can contribute to extreme intestinal illness and brain damage. In fact, KFC is already in hot water in Texas for serving contaminated chicken and just recently was fined $8.3 million to the family of an Australian girl who received salmonella-tainted chicken that resulted in severe brain damage.

While eating fried foods on the rare occasion will probably not kill you, a steady diet of fried fast food can be extremely unhealthy. KFC touts itself as a “healthy” alternative to burgers. However, the reality is that you are consuming large amounts of unhealthy fat and calories in their products. Whether you are eating just the chicken or a sandwich, you are still getting unhealthy fried foods coated in processed flour breading.

KFC is a tradition for many families. How many people grew up eating a bucket of chicken at football games or on nights when mom was too tired to cook a meal. However, it is also in the tradition of consuming processed foods that have contributed the obesity epidemic in the United States. In addition to consuming the fried chicken (processed), most of us also eat a good-sized amount of mashed potatoes and gravy (processed), a bit of cole slaw (processed) and a couple of large biscuits (processed). To top it all off, we wash it down with a large glass of soda (processed). We might complete our lovely meal with a big slice of chocolate cake (processed), because they offered it for free with the meal, after all.

Thinking of eating KFC for dinner tonight? On second thought, maybe not after all.

What are better alternatives for a fast and easy meal? What do you serve your family when you are tired and don’t want to cook?