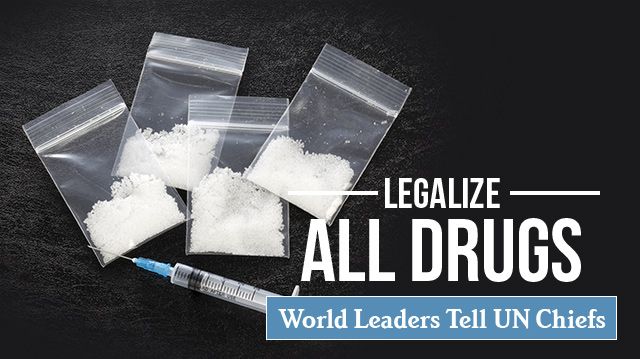 Legalizing marijuana has gained traction in the United States, with nearly 58 percent of Americans backing the measure. But what about legalizing all drugs?

A group of former world leaders argued to the United Nations for the legalization and/or decriminalization of not only marijuana but all drugs. In the report from the Global Commission on Drug Policy, the leaders, led by former UN Secretary General Kofi Annan, argued that the global war on drugs has not only failed but also threatens public health, encourages discrimination, and fuels violence and other crimes.

“The facts speak for themselves. It is time to change course,” Annan said in a statement. “We need drug policies informed by evidence of what actually works, rather than policies that criminalize drug use while failing to provide access to effective prevention or treatment. This has led not only to overcrowded jails but also to severe health and social problems.”

Decriminalizing — let alone legalizing — would be a bold move, and given the resistance by legislators to legalize marijuana federally, it seems unlikely to happen anytime soon. Still it’s worth asking: What are the arguments for and against allowing drug use without penalty?

The Global Commission on Drug Policy does not call for legalization immediately. Instead, it calls for decriminalization of drug use and possession followed by local experiments in complete legalization. One of the primary reasons for their position is that these policies disproportionately target certain segments of the population. For example, a recent study found that African-Americans were arrested for marijuana use much more often than whites. Decriminalizing drug use and possession would also help to reduce the population of our nation’s prisons, which are currently overcrowded.

Aside from racial issues, there are economic arguments for the legalization of drugs. In a report for the Cato Institute, a think tank based in Washington, D.C., Jeffrey A. Miron of Harvard University and Katherine Waldock wrote that the government would save approximately $41.3 billion annually in the form of savings from the enforcement of prohibition. Of those savings, $8.7 billion would come from marijuana while the majority — $32.6 billion — would come from harder drugs like cocaine and heroin.

“Legalization would reduce state and federal deficits by eliminating expenditure on prohibition enforcement — arrests, prosecutions, and incarceration — and by allowing governments to collect tax revenue on legalized sales,” wrote Miron and Waldock.

Other groups, like Law Enforcement Against Prohibition (LEAP), argues that it is prohibition itself that makes drugs so valuable to violent groups and criminals. Since the drug trade is illegal, and thus unregulated, it makes it harder for law enforcement to monitor. The thought is that legalizing drug use would make it more regulated and safer for everyone.

“Prohibition costs taxpayers tens of billions of dollars every year, yet 40 years and some 40 million arrests later, drugs are cheaper, more potent and far more widely used than at the beginning of this futile crusade,” the group says on their website.

While many studies show that marijuana has little to no health risks, the same cannot be said about all drugs, particularly substances like heroin. Many opponents of drug legalization worry that allowing the widespread use of drugs could result in a severely addicted and unhealthy population. Charles D. Mabry, Assistant Professor at the College of Medicine at the University of Arkansas, wrote in an Oct. 2001 article titled “Physicians and the War on Drugs: The Case Against Legalization”  that there is little evidence that legalizing drugs would result in a less addicted population. In fact, he wrote that cocaine and other drugs were freely available in the early part of the 20th century and that the number of addicted individuals “sharply dropped” once availability was limited.

Others argue that the scenario described by legalization proponents — that the dangerous drug black market that currently exists would go away — is a myth. The Drug Free Foundation argued on its website that if drugs were legal for anyone over the age of 18 or 21, a black market would emerge for those under that age.

“After Prohibition ended, did the organized crime in our country go down? No. It continues today in a variety of other criminal enterprises,” the organization argued. “Legalization would not put the cartels out of business; cartels would simply look to other illegal endeavors.”

One surprising opponent of legalization comes from drug users themselves. For example, marijuana farmers in northern California spoke out against legalization of the drug in the state because of the worry that the widespread availability of pot would hurt the quality of the product available and damage the growing marijuana industry in the state. They also fear that legalization would lead to large corporations that would swoop in and monopolize the industry.

So what do you think? Is there a valid reason to push for legalization of all drugs, or is the status quo the way to go?