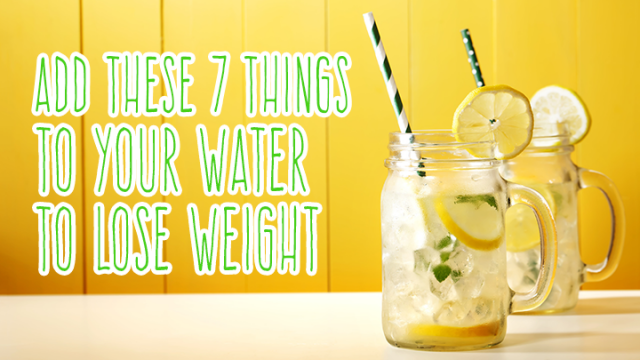 Water is absolutely vital to life. Our bodies are composed mostly of water, and without it, we would cease to live. It is common knowledge that we need to drink eight to ten glasses of water each day to be optimally healthy — and it’s important to make sure the water we are drinking is clean and fresh.

Not only does water keep us hydrated and keep our body’s systems running smoothly, it is also critical in the prevention of disease. If we do not drink enough water, we not only feel crummy, but we also set ourselves up for a number of health problems.

While plain water is critically important to drink, there are many superfoods and superherbs that can be added to boost your water’s health quotient — and in some cases, its flavor! The following are seven of many!

Apple cider vinegar (ACV) has a wide array of traditional uses, and has been featured in home remedies for centuries. Just a few of its uses include regulating the body’s acidity (pH) levels, easing digestive discomfort, relieving heartburn, helping to prevent seasonal illness, and reducing inflammation.

The potential for apple cider vinegar to reduce inflammation throughout the body is a highly important one, as inflammation lies at the root of many chronic illnesses.

Additionally, ACV has been found to aid in weight loss and help to stabilize blood sugar. A 2010 study published in the Annals of Nutrition and Metabolism tested the blood sugar lowering effects of vinegar. On their results, the authors wrote:

“The antiglycemic properties of vinegar are evident when small amounts of vinegar are ingested with meals composed of complex carbohydrates. In these situations, vinegar attenuated PPG [postprandial glucose] by 20% compared to placebo.”

The study’s lead author, Carol Johnston of the School of Nutrition and Health Promotion at Arizona State University, added:

“Acetic acid, the main component in vinegar may interfere with the body’s ability to digest starch… If you’re interfering with the digestion of starch, less is being broken down into calories in the bloodstream. Over time, that might cause a subtle effect on weight.”

The authors of another study, performed in 2006 and published in the journal Medscape General Medicine, wrote:

“The marked antiglycemic effect of vinegar in insulin-resistant subjects is noteworthy and may have important implications.”

Try it: Always choose raw, unfiltered, organic apple cider vinegar, which will look cloudy and contain a web-looking substance known as the “mother of vinegar.” Mix about a tablespoon into a glass of warm water, and drink 30 minutes before a meal.

Lemons have been celebrated for generations for their healing abilities, including their powers of detoxification, aiding digestion, and cleansing the liver. They also have potent antibacterial and antiviral properties, and can help to support the immune system.

On top of that, they can help to provide a healthy dose of energy, and balance the body’s pH, as they become alkaline inside the body.

Lemons contain important nutrients and antioxidants, as well, which both nourish the body and help to reduce inflammation. The authors of a 2010 study published in the Journal of Pharmaceutical and Biomedical Analysis wrote:

“Citrus genus is the most important fruit tree crop in the world and lemon is the third most important Citrus species. Several studies highlighted lemon as an important health-promoting fruit rich in phenolic compounds as well as vitamins, minerals, dietary fiber, essential oils and carotenoids.”

Try it: Lemon water couldn’t be easier to make: Simply squeeze a fresh, organic lemon into a glass of water, and enjoy! Warm lemon water is a great way to get your day on the right track each and every morning.

While salt is often demonized in the media, our bodies need it to survive. In fact, it has been shown that too little salt can be even more dangerous than too much salt — and the links to disease commonly associated with salt seem to mainly apply to processed salt, and not the real, unrefined stuff.

According to a 2001 study published in the journal Exercise and Sports Sciences Reviews:

“Exercise-related hyponatremia [salt deficiency] is an infrequent but potentially life-threatening accompaniment of prolonged exercise. This condition results from sodium losses in sweat, excessive water intake, or both.”

To combat this risk, especially if you are undertaking vigorous or extensive exercise, add some unrefined Himalayan salt crystals to a glass of water. On top of preventing hyponatremia, real salt allows our bodies to absorb the goodness of water, and also helps to reduce inflammation, promote healthy digestion, and more.

Try it: Check out our article on making your own Sole (warm saltwater), and reasons why you should!

Raw honey not only serves to provide a sweet, delicious flavor to your water concoctions (try it with apple cider vinegar and lemon!), it also has many health benefits. Local honey from your area can help to desensitize your body to local allergens — thus potentially reducing your allergy symptoms!

Research has also shown that raw honey can help tremendously to sooth a cough or cold. A 2007 study performed at the University of Pennsylvania found that raw honey was effective at preventing coughs in children who were afflicted with an upper respiratory infection.

Try it: Mix a tablespoon or so into a glass of water, with or without the other things listed in this article, and drink up! If you can’t find local honey, try seeking out a jar of certified Manuka honey.

Lemongrass, also sometimes called cymbopogon, has been featured in Chinese and Ayurvedic traditional medicines since ancient times. It is linked to antibacterial, antiviral, and antiseptic properties. It has traditionally been used as a “cure-all” tonic for its high vitamin C content and its links to aiding in the healing of many illnesses.

Just a few of the benefits of lemongrass include aiding digestion, detoxifying the body, mitigating the symptoms of seasonal illnesses, clearing the skin, relieving pain, and reducing anxiety and insomnia.

Try it: Steep a warm cup of tea from distilled water and organic lemongrass stalks. Alternatively, you could add a handful of lemongrass to a pitcher of water, let it infuse for a few hours, and sip throughout the day.

Cinnamon not only provides a warm and delicious flavor, it’s remarkably healthy, too. It is loaded with minerals, including manganese and calcium, and contains a number of volatile essential oils with potent anti-inflammatory properties. The cinnamaldehyde found in cinnamon is specifically linked to improving circulation, and potentially aiding in the prevention of heart attack and stroke.

This ancient spice has also been associated with lowering blood sugar and improving insulin sensitivity. For diabetics and pre-diabetics, this is one spice not to miss.

Try it: Add between half a teaspoon and a teaspoon of ground, organic cinnamon to your water (along with honey, lemon, ACV, or any of the healing foods on this list), and sip. You could also brew a tea, or infuse a pitcher, with whole organic cinnamon sticks. 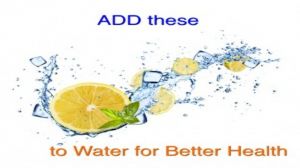 As far as antioxidant content, oregano is hard to beat. The antioxidant compounds found in this fragrant herb, most notably rosmarinic acid, help to neutralize free radicals in the body. This can help prevent a wide variety of chronic illnesses, including heart disease and many types of cancers, and protect the body’s cells from harm.

Try it: Infuse a pitcher of water with whole, organic oregano leaves, and sip throughout the day. You could also brew the leaves into a healing cup of oregano tea.

Note: While these water additions are completely natural and very healthy, it is always wise to check with a health professional you trust before starting a regimen with any new food or herb, especially if you suffer from a health condition.

What’s your favorite way to drink your water?