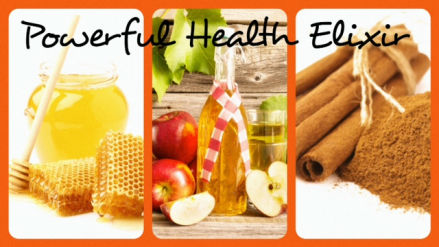 From cleanses and juices to fasts and fad diets, Americans spend a pretty penny on any product that promises excellent health and proper weight maintenance.

Unfortunately, time and time again we are fooled into believing that a heavily processed, factory concocted and mass produced food, beverage or pill will do the trick only to be let down when results fail to surface.

Rather than looking for a quick fix from a pharmacy or worse yet, an afternoon infomercial, you need search no further than your local health food store or farmer’s market. An easy to make and nourishing syrup can be made from three healing ingredients.

Combine the ingredients in a jar and stir well. The jar can be kept in a cool dry area, though if stored in the refrigerator the honey may settle and the mixture will need to be stirred before consumed.

What does this super syrup do?

Though simple in preparation, this healing tonic is complex in its treatment capabilities. Along with playing a key role in health maintenance, this potent combination of ingredients is capable of treating numerous conditions including but not limited to:

The syrup also boosts immunity, aids in heart health and detoxifies the body.

But before you run to the grocery store to whip up your first batch, there is one key component that must be followed to reap the rewards. The ingredients must be of the highest quality or the excess processing, pasteurization and additives counteract any benefits. Here’s what you need to know about each ingredient.

Apple cider vinegar must be raw, organic and unfiltered. As more companies are catching on to the healing benefits of apple cider vinegar, they’ve begun doling out batches of this potent health elixir. However, as with most mass-produced products, the over-processing required to make the item more “desirable” often diminishes the health benefits.

This is especially true for apple cider vinegar which is made from allowing crushed apples to ferment over time. Organic apples are key as any pesticides or residues contaminate the mixture from the start.

Once the fermentation time has come to an end, the resulting beverage should appear brown and cloudy with “floaters” suspended throughout. This cloud is referred to as the “mother” as it is the primary life-giving feature of apple cider vinegar. The “mother” is a combination of various nutrients and bacteria that provide the numerous health benefits.

Synergistically, these compounds provide profound health benefits not seen amongst other beverages.

However, mass-marketers believe the “mother” is unappealing and often filter it out leaving behind a crisp clear vinegar much more eye-catching to the consumer. Unfortunately, these vinegars, though appealing, are nutritionally void and should be avoided by all means.

Honey must be from the hive, raw and unfiltered.

Those cute little bear-shaped jars at the grocery store are hiding a dirty secret. Most of them don’t contain enough of the pollen and other natural compounds to even be deemed true honey any more.

Unfortunately, most store-bought honey has been filtered and pasteurized to such an extent that it resembles true honey only in color and texture. These practices are often put into place to extend shelf-life and create a more appealing product. Even more disturbing is the fact that a majority of store-bought honey has been imported from places like China or India and has been found to be full of contaminants such as antibiotics and harmful metals.

When purchasing honey for your syrup, always select an organic raw product. While more difficult to find, you can often track it down at specialty health food stores and farmer’s markets.

Cinnamon is an aromatic spice that often conjures up images of tasty fall treats. Yet this potent spice offers more than a hint of nostalgia. Cinnamon has long-been revered for its healing capabilities. As little as ½ teaspoon provides numerous benefits including:

Yet often, imported spices carry with them a high risk of contamination and this is what is often found on store shelves. The FDA has noted rodent hair, insect bodies and parts as well as harmful bacteria such as salmonella among imported spices. Even worse, the FDA notes imported spices tend to be contaminated at twice the rate of other imported food items and even heating spices at high temperatures won’t make them safe to consume.

To protect yourself from these dangerous toxins, purchase locally grown or organic domestic cinnamon only. Or, for those with a green thumb, cinnamon can easily be grown in an herb garden.

When made from the proper ingredients, this potent health elixir offers profound results. Whether you are looking to maintain good health or are treating a specific ailment, a standard dose of two tablespoons in the morning and two again in the evening should suffice. Consume the dose after a meal as the acidic nature of the vinegar can upset the stomach.