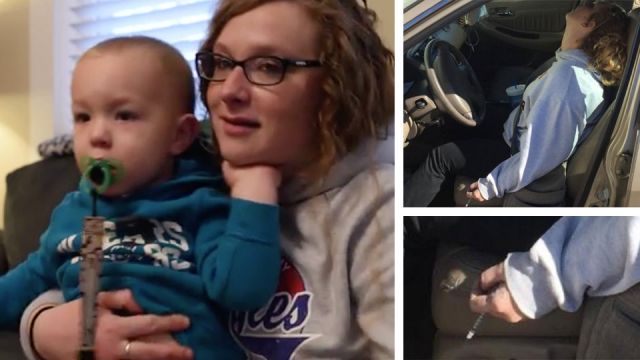 When Erika Hurt first saw this demoralizing photo in jail, it shattered her:

⭐️ #News • Another overdose, another baby in the back seat – is this the new face of drug addiction?: Erika Hurt is… https://t.co/9AK6IVAgKS pic.twitter.com/X8wZ2nxHW7

Now, one year later, she says it helped turn around her entire life. Hurt is a 26-year-old woman from Hope, Indiana who passed out from heroin in a parking lot with a syringe in her hand.

When the picture was taken, things were not going too smoothly in her life. Not only was she intoxicated off the heroin, but it happened to be laced with morphine, causing emergency medical professions to be called to the scene. She was saved with a shot of Narcan.

As if that situation couldn’t get worse for Hurt, her 1-year-old son was sitting in the back of the car at the time. The photo was pushed out very hard by local police departments as a way to spread light on the rapidly growing opioid epidemic throughout the United States.

While serving her sentence for neglect of a child, she saw herself on TV and in utter embarrassment, she used the situation as motivation to change her life forever. “They exposed me and my addiction to the whole world,” Hurt recounted. “I thought it was terrible.”

Here is a video of Hurt, featured on NBC:

Hurt admitted that she didn’t even know of the photo’s existence before she saw it on that dreadful day. “At the same time, it was kind of a really big eye-opener to see myself like that,” she said.

She believes that it was a good thing it went viral, because it reminds her of the pain she once went through. Hurt claims that she became addicted to heroin after she took painkillers at age 15. After serving in jail, she now believes that her life is trending upwards. Currently, she has a local job with a plastic-molding plant and continues to attend self-help meetings.

Thankfully, she can now claim her first entire full year of sobriety. Eventually, she hopes to get custody back of her son who is currently being watched by her mother.

Hope Town Marshal Matt Tallent, who authorized the posting of the viral photo, couldn’t be happier about Hurt’s determination to get her life back on track. “For this girl to have her life ripped up and then come back and be sober after everything that’s happened to her — that’s a story of success,” he said.