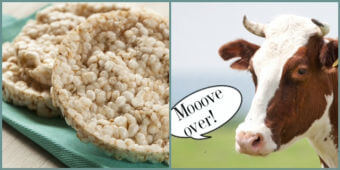 If you have ever been on a low-fat diet you may remember the cardboard taste of rice cakes. Snacking on those cakes while all your friends were enjoying their juicy burgers or potatoes drenched in butter was like torture.

All along, you were listening to popular advice, to the food manufacturers and to what the United States Department of Agriculture was telling you. Cut back on fats, cut calories, eat more grains, and whatever you do, don’t eat any foods that contain cholesterol.

Well, the sleeping cat has been let out of the bag. Now, the so-called “war on fat” that started in 1977, is being called one of the biggest mistakes ever made in the history of nutrition. While millions of Americans were dutifully snacking on rice cakes and other such foodstuffs, disease in America began to skyrocket along with obesity.

In fact, as soon as the new “low-fat” dietary guidelines were introduced, the lateral spread began.

We have now found ourselves smack dab in the middle of a pandemic of obesity, metabolic syndrome, heart disease and diabetes after consuming rice cakes and other high carbohydrate refined foods and pushing healthy fats such as grass fed beef, dairy and eggs to the side.

Rice cakes are symbolic of all so-called diet foods that are nothing close to real food. Labels state that these foods are “heart healthy”, void of fat and dietary cholesterol and a dieter’s delight, however, there is really nothing of value in any of them that the body can use for energy. The only thing you get from eating rice cakes is elevated blood sugar and food cravings.

Studies done over the last several decades clearly show that neither saturated fat nor dietary cholesterol cause harm in humans. The old theory that told us to avoid meat, eggs, coconuts and dairy stated that saturated fats raise bad cholesterol in the blood and bad cholesterol gets stuck in our arteries which causes hardening and eventually heart disease, is clearly wrong.

Studies done on low-fat diets show clearly that replacing healthy fats with low-fat processed foods does not equal health or cause weight loss and has zero effect on cardiovascular disease in the long term.

With all of the evidence, it is astounding that some organizations still claim that healthy saturated fats are to blame for the modern diseases we see today, and warn us to stay clear of them. Clearly the obesity epidemic started when people traded their grass fed beef and butter for rice cakes and margarine.

What is the Truth?

Saturated fats help to elevate good cholesterol and improve the ratio of triglycerides to HDL. They also help change small and dense LDL cholesterol particles that can clog arteries, to large harmless particles.

A study done at Harvard University concluded that “greater saturated fat intake is associated with less progression of atherosclerosis.” 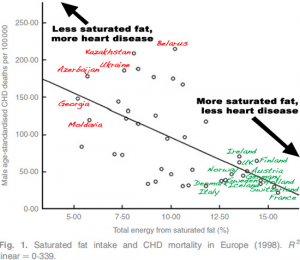 It details how the scientific groundwork that this belief is based upon was heavily manipulated from the start, and presents large-scale studies that clearly show the lack of connection between cholesterol levels and heart disease.

In short, mounting evidence shows that our focus on lowering cholesterol, and our growing reliance on statins, a class of cholesterol-lowering pharmaceuticals, is both drawing research focus away from investigating the actual causes of heart disease, and, literally killing us.

Statin Nation interviews medical experts from a variety of fields, who each present a wide array of large-scale studies showing that there is no evidence-based relationship between high cholesterol and heart disease.

In fact, studies have found that LDL ‘bad’ cholesterol is actually LOWER in heart disease patients than in the general population, and also that low cholesterol levels are associated with earlier death.

Additionally, a study performed in Japan found that those with the lowest cholesterol levels had a three-fold higher likelihood of dying of cancer.

Sweden, a nation that has rejected the diet-heart hypothesis and instead has embraced a low-carb, high fat diet, is reporting significant improvements in the overall health of its citizens.

It is time to get back to eating the way our grandparents and great grandparents ate. Ditch the diet foods for real foods, real fat and real dairy. Understand that healthy fat does not cause heart disease, diabetes or obesity. The body needs fat and cholesterol in order to function.

Highly processed, refined foods loaded with sugar, additives, modern wheat and other chemically concocted ingredients are the villains. It is time to put away the rice cakes and bring back the fat!