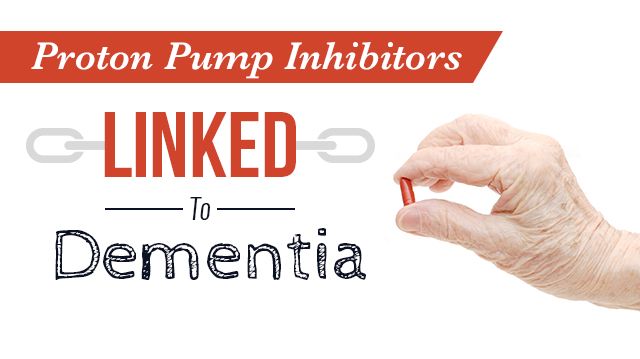 Statistics compiled by the Alzheimer’s Association state that approximately 5.3 million Americans — 5.1 million of whom are over the age of 65 — have been diagnosed with Alzheimer’s disease as of 2015. Alzheimer’s disease, the most common form of dementia, is the sixth leading cause of death in the United States.

According to Lester Holt of NBC Nightly News, about 15 million Americans take proton pump inhibitor drugs (PPIs) to control their heartburn. PPIs such as Prilosec, Nexium and Prevacid are now some of the most frequently used drugs in the U.S.

So, what’s the connection? A new study, recently published in JAMA Neurology, has found that adults over the age of 75 who use PPIs may have a significantly higher risk of developing dementia.

“Medications that influence the risk of dementia in the elderly can be relevant for dementia prevention. Proton pump inhibitors (PPIs) are widely used for the treatment of gastrointestinal diseases but have also been shown to be potentially involved in cognitive decline.”

To arrive at their results, researchers analyzed data regarding PPI use and dementia risk in just over 218,000 individuals aged 75 and over between 2004 and 2011. In the final analysis, just under 74,000 people were assessed (the rest were excluded from the study throughout the course of the analysis).

Results of the study showed that “regular users” of proton pump inhibitor drugs had a 44 percent higher risk of dementia, compared to older adults who did not take these drugs. Women were found to have a higher risk than men. The PPIs examined in this analysis were esomeprazole (Nexium), omeprazole (Prilosec), pantoprazole (Protonix), lansoprazole (Prevacid), and rabeprazole (AcipHex).

While this study was limited in certain ways, as only a few risk factors for dementia were included in the analysis, it does present a “statistical association” between the use of PPIs and dementia risk. The study authors stated:

“The avoidance of PPI medication may prevent the development of dementia. This finding is supported by recent pharmacoepidemiological analyses on primary data and is in line with mouse models in which the use of PPIs increased the levels of β-amyloid in the brains of mice. Randomized, prospective clinical trials are needed to examine this connection in more detail.”

A potentially higher risk for dementia is not the only concern surrounding PPI use. These drugs have also been linked to bone loss, kidney damage and heart attacks. As uncomfortable and often painful as heartburn can be, fortunately there are many natural ways to remedy it — without the scary risk factors that come with PPIs.

First of all, it is important to mention that stomach acid is necessary for many bodily functions, including the absorption of vital nutrients. Having stomach acid that is too low can lead to more problems than it solves. In order to bring balance to your digestive system (and not battle your natural stomach acid production!), several remedies can help.

One of these is apple cider vinegar (ACV). Although it may seem counterintuitive, as it is acidic, drinking two tablespoons of ACV in a six-ounce glass of water before meals may help keep you heartburn-free. Be sure to purchase raw, organic apple cider vinegar, with the “mother of vinegar” — that web-like solid floating inside — intact. That’s how you know it is the real stuff.

Ginger tea, slippery elm tea, and certain herbs can also help with acid reflux. To find the remedy that’s best suited to your individual health needs, it is wise to speak with a health professional you trust about the options available.

Above all, be extra wary about pharmaceutical options, which usually only mask the problem, and may lead to a range of side effects and other health conditions much worse than acid reflux.