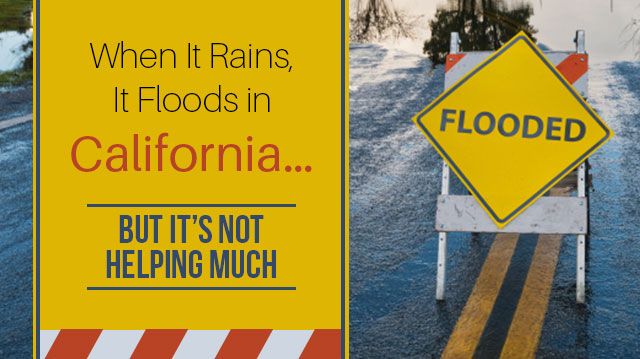 Recent damage from the El Niño weather phenomenon made headlines in California and indeed across the country. Heavy rainfall brought the normally empty concrete of the L.A. River back to life and caused flooding and mudslides across Southern California.

The historic Golden State drought is not over yet — and the unpredictable weather system could cause severe damage to crops, homes and infrastructure. Thanks to four years of little rain, the excessively dry land can act like concrete and prevent absorption.

“The land has been so dry for so long, it’s almost impermeable,” Mary Simms, a spokeswoman for the Federal Emergency Management Agency, told CNBC.

The heavy rains stand in stark contrast to the severe drought that has parched America’s most populous state and some of its biggest agricultural areas. Huge signs dotting the I-5 — the most important North-South route on the Pacific Coast — offer dire warnings along the farm-filled San Joaquin Valley about water and the world’s food supply.

The region produces two-thirds of the country’s fruits and nuts and more than one-third of the nation’s vegetables. Hard hit by the prolonged drought, some farmers let fields lay fallow and others went out of business entirely.

The folks behind the signs are Families Protecting the Valley, a network of farmers and concerned citizens in the San Joaquin Valley whose goal is to protect the local water supply.

“The water issues are far from over,” Jesus Ramos, a farmer who owns 140 acres in San Joaquin Valley, told CNBC. Thanks to the years-long water shortage, the water bill for his ranches rose from approximately $17,000 a few years ago to more than $200,000.

Although rain brings hope of recovery, Ramos is right. The immediate danger, however, is catastrophic damage as El Niño causes rains that run unimpeded to the sea.

Along with flooding and mudslides, the Central California coast was pounded by waves up to 15 feet on Jan. 7. Despite the warnings about coastal flooding and high surf, a surfer in San Luis Obispo County was pulled from dangerous waves but was reported to be okay.

The multi-day storm hit especially hard in San Diego County, where the roof caved in at a Goodwill store in Escondido and a mudslide in a residential neighborhood shut down traffic.

No injuries were reported at the Goodwill, but four inches of mud made it into Tony Lewellen’s Rancho San Diego home, he told NBC San Diego. “There’s not much vegetation left up there because of the drought and stuff, so it’s like a slip-and-slide,” he said. “It just runs down the mountain.”

Despite the storm-related emergencies, The Golden State continues to grapple with severe water shortages.

The precipitation deficit in California over the past four years has led to significant reservoir and groundwater depletion. Much of the depletion occurred in groundwater in the driest parts of the state, making recovery difficult.

On December 31, state reservoirs were 22 percent to 55 percent lower than their historical average, while snowpack in the Sierra Nevada reached a 500-year low. Snowpack, the mass of snow that is compressed and hardened by its own weight, is critical, as much of the state’s water comes from spring melting.

First, the good news. Snowpack is now at 113 percent of normal for this time of year!

The bad news: It will take several months of storms to end the drought, and those storms have to be in the right place to help.

Rain on the coast is good news, but most of that ends up in the ocean. The state really needs storms up in the mountains and below-freezing temperatures to keep it there. High temperatures cause flooding rather than adding to snowpack.

Drought may be the new normal. The past century has been among the wettest in the last 7,000 years, Scott Stine, a professor at Cal State East Bay who has studied tree rings in California for decades, told the San Jose Mercury News. Megadroughts occurred from 850 to 1090, and again from 1140 to 1320. 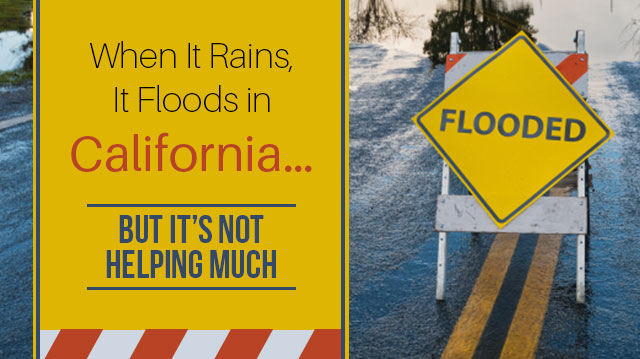 “We continue to run California as if the longest drought we are ever going to encounter is about seven years,” Stine said. “We’re living in a dream world.”

If the way California manages water is unsustainable — agriculture consumes 52 percent of the state’s water in a dry year — other nations have faced water shortages and thrived. Southeast Australia faced a megadrought that lasted 13 years, surviving by finding new water sources, reducing usage and reusing water.

The government there subsidized the purchase of water efficient toilets, shower heads and washing machines. Residents captured what little rain that did fall with rainwater tanks, which they used to water landscaping and flush toilets.

When the drought finally ended, Melbourne residents had cut household water use in half.

In Israel, there is never enough water. Still, the country has a small but vibrant agricultural sector. Israel made the desert bloom by relying on conservation, recycling, and innovative technology. The country treats 80 percent of its wastewater, which it reuses for public works and agriculture.

More and more, wacky weather seems to be the norm across the country and around the world. Last year was the hottest on record. The East Coast just faced an El Niño-driven winter storm bringing snow and sleet from Georgia to New York and beyond.

And it will probably be a long time before California recovers from its drought, but with a little luck in the form of El Niño, and smart water management, the state can move forward.