The average cost of raising a child born in 2013 was estimated at $245,000. In all likelihood, this number has since risen. Add this to rising rental costs, unprecedented student loan debt and an economy just coming out of a recession and it’s no wonder woman are having fewer children.

The US birth rate fell by more than 15 percent between 2007 and 2012. The numbers started to shift cautiously upward around 2013, but many fear that millennial woman may by choice experience permanently lower fertility rates. More than one in five women appropriately aged for childbearing during the Great Depression never had children, and we may be seeing an echo of that caution in today’s young women.

While some studies on millennial-born babies point to lifestyle choices, a number of polls suggest that millennials do want kids — some just aren’t sure how they could ever afford them. They certainly haven’t been in a position to afford them so far, in their twenties.

A shift in the age of new mothers, however, suggests that millennials aren’t foregoing children altogether, they are simply waiting longer than any other generation. The increase in birth rates since 2013 has been largely attributed to women in their thirties and even their forties.

Woman in their twenties have historically been the group bearing our nation’s children. In fact, until the 1980s, more children were born to women aged 20 to 24 than any other age group. We’ve been on a slow upward trajectory since.

For those women who are delaying child rearing for financial reasons, a deeper look into the numbers sheds some light on how this $245,000 is being spent. More importantly, it may point to ways to minimize this burden.

Right off the bat, there are several key trends in how the numbers were configured that lend insight on how to raise a child inexpensively. The report notes that costs differ significantly depending on where a family lives.

A family in the South, for instance, can expect to pay roughly $230,000; rural families will pay around $193,000; and those families in the Northeast will pay a whopping $282,000. Moreover, families with more children spend significantly less per child. Those with three or more children can cut per-child costs by 22 percent.

It is also important to recognize that this report is based on data from the government’s Consumer Expenditure Report. Just because the average middle-income family spends this much on their children doesn’t mean that every family can or should spend these amounts. Not surprisingly, the data shows that families of different income levels spend substantially different amounts on their children.

How this money is spent is important. Some areas leave more room for creativity than others. The highest expense by far is housing, which makes up 30 percent of child-rearing costs. This is why living in a less expensive area makes such a big difference. It also explains the cost differential between having one child or several, as many young children share bedrooms. 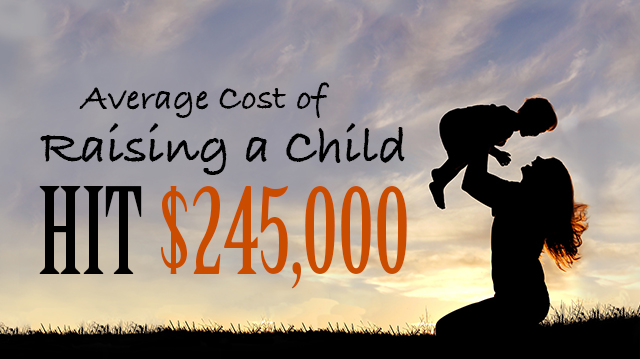 Child care and education make up the second-largest expense at 18 percent, but a closer look at the data reveals an important caveat. About half of those households surveyed reported no spending under this category. While previous reports included households with no spending in the average of how much was spent, the 2013 study did not. Costs were assessed by age group, so one family might have child care costs but then send their children to public school or vice versa. Only those years where cost was incurred would be included in the data.

In short, if you have child care and educational costs, then you can expect these services to amount to roughly 18 percent of expenditure. Otherwise, this cost will be closer to zero. This change in reporting explains in part why the 2013 report saw a significant increase in child-rearing expenses when compared to the 2012 report.

While the other categories surveyed are certainly malleable, they are not quite as fluid as housing and educational/child care costs. They also make up a smaller percentage of the pie. This study does not include the impact of the Affordable Care Act or rising food costs since 2013.

The expenses estimated here compute the cost of raising a child until the age of 18, so it does not count a college education. The average cost of college tuition and fees ranges from $9,139 to $31,231 per year.

That does not include the cost of setting up and funding an entire separate household for your scholar during a four-year period. The annual cost of a college education is significantly higher than any other year of child rearing, where yearly expenditures average $13,500. In fact, more and more parents are dipping into their retirement funds to cover these expenses.