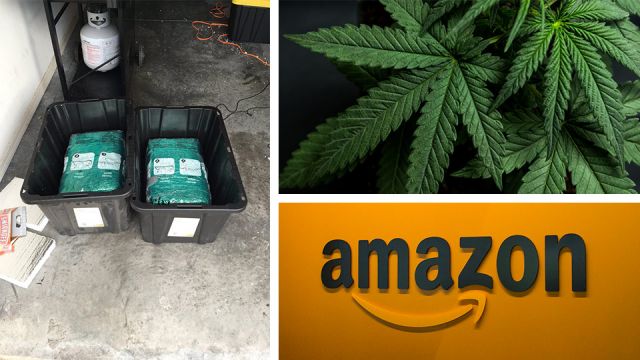 Typically, ordering goods on Amazon is an easy and high-quality experience. However, this one Florida couple experienced another kind of “high” from Amazon when they found 65 pounds of marijuana in the plastic storage pins they ordered.

While they did get the correct 27-gallon storage pins, they were utterly shocked about what was inside them. When opening the package, the customer said, “They were extremely heavy, heavier than you would think from ordering four empty bins.”

Here is an image of the bins with the marijuana in them:

Can you imagine?
Amazon customers in Orlando got unexpected marijuana delivery 📦-65-pounds! #WFTV at 6pm pic.twitter.com/yYywuKYpnU

Also, after opening the package, the couple smelled an unusual odor, which they later realized was the marijuana.

The order was shipped by an Amazon warehouse that deals with UPS from a facility in Massachusetts, a state which has recently legalized recreational usage of the substance. Police have confiscated the marijuana and an investigation is currently underway, with no current arrests being reported.

The couple was reportedly scared about their safety, which prompted them to call Orlando police. They were afraid the apparent owner of the marijuana would eventually find their address and try to break in, especially considering the extremely high market price of 65 pounds. For some perspective, according to Forbes, an average pound of marijuana goes for nearly $1,500.

Following the surprise delivery, Amazon issued the couple an apology and said they will help law enforcement in any way possible with their investigation. The couple says that got a $150 gift card from Amazon with a message reading, “I am unable to do anything else at this time.”

The bizarre incident has sparked lots of conversation online:

#Amazon now ships #marijuana? #orlando couple got 29 kilos in there order of storage containers. can’t imagine the look on there face #OMG pic.twitter.com/m9h5ZIznB3

a couple ordered storage bens from amazon but received 65 pounds of weed instead. Lmao. how!?😂

Do you use Amazon? Ever had a problem as crazy as this? Let us know!