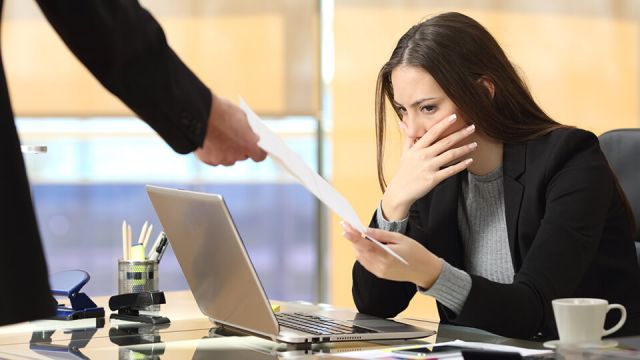 If you’re about to get fired, then there’s a good chance the warning signs are all around you. The problem is, you’ve likely chosen to ignore them. If you want to stay on top of your game, always keep an eye out for telltale signs that your job is in danger. That way, you can make some quick changes before you’re handed a pink slip.

Your performance review was less than perfect

A bad performance review could be as simple as your boss helping you improve in your job. On the other hand, a bad performance review could be a paper trail that leads to being fired. Employment expert Howard Levitt for Monster.ca says your employer may be creating a paper trail to build a case against you for termination. Don’t be lulled into a false sense of security either, simply because you’ve only had minor incidents that have spanned over a long period of time. Those too, suggest Levitt, can amount to cumulative cause for dismissal.

Your boss won’t look you in the eye

Barring social anxiety, there may be a good reason why your boss can no longer look you in the eye when speaking. The first may be that he or she really isn’t that interested in speaking with you. The second reason may be that he or she is hiding something from you. Either way, not looking you in the eye speaks volumes when it comes from your boss.

Your HR manager is behaving strangely around you

People are only human. When there’s bad news afoot, you can usually see it in the faces of those who are privy to the information. My friend was on his way to see his boss. When he passed the HR manager’s office, she threw herself dramatically over her computer screen, as if to hide what she was writing. He thought it was an odd thing to do. But when he was fired that same workday, it all made sense.

Coworkers stop speaking when you enter the room

The same odd behavior you’ve witnessed coming from your HR manager has now spread to your coworkers. If you walk into a room only to be met with silent stares, there’s a good chance they know something you don’t. If your “friends” seem to shy away from you, it probably means something’s up.

Your company is going through a merger

After a merger, it’s not uncommon for a company to lay off employees. That’s because mergers generally take place for the purpose of joining two or more companies to achieve greater efficiencies of scale and productivity.

Back in 2005, when Procter & Gamble announced that it would buy Gillette for $57 billion, 6,000 people were slated to lose their jobs once the companies joined. Peter Cappelli, director of Wharton’s Center for Human Resources at the University of Pennsylvania, says the reason why is because the investors focus on costs, which generally means cutting workers to save money.

So, if you’re hearing rumors about mergers, then sit down with your boss and have a good heart to heart about your future with the company. Going through merger suggests it’s time to clean house, and that could mean dropping you from payroll.

Your boss goes to your subordinates for information

You were once a “go-to” person for your boss. But lately, all signs point towards being left out of the loop. Most companies have a clear chain of command. When it’s disturbed, and your boss goes to subordinates for information that he could easily get from you, then your position may soon become obsolete.

On the other hand, if you’re suddenly being micromanaged, that could indicate that your boss no longer trusts you or feels you’re capable of completing the simplest of tasks.

Suddenly your boss is handing you projects or tasks too impossible to complete. In the 2006 film “The Devil Wears Prada,” assistant Andy Sachs, played by Anne Hathaway, is given the impossible task of obtaining an unpublished Harry Potter manuscript for her boss Miranda Priestly, played by Meryl Streep. Streep’s character attempts to undermine her assistant with a task too hard to complete for the mere pleasure of seeing her fail and, therefore, firing her.

Your life may not be a movie script, but this scenario may sound eerily familiar. If your boss is asking you to jump through hoops with unrealistic tasks, then he or she may just be looking for an excuse to fire you.

You don’t fit into the company culture

Not all company cultures will fit your work style. In short, company culture is the personality of a company. It generally defines the environment in which employees work and may include company mission, value, ethics, expectations, goals and work environment. For instance, some companies have a team-based culture and expect employee participation on all levels — even socially.

I once worked for a company with a strange work culture that I just couldn’t wrap my head around. Upon hire, my boss asked me if I played tennis, which I (sheepishly) said, occasionally. He then asked me to consider joining his private club, so that we could play tennis over lunch. The truth was, I hadn’t played tennis since high school. Not to mention, membership to his club was substantially more than my yearly salary could afford.

Still, he became slighted and somewhat enraged that I wouldn’t join. I soon found out that succeeding in that company meant giving into the alpha-male culture. I couldn’t do that, so I was fired. If you’re told you don’t fit into the company culture, then don’t be surprised if you’re suddenly handed a pink slip.